African acts are known for exporting culture worldwide. Many internationally recognised celebrities are Africans by descent. Nigeria, Congo but Kenya is excelling, the former President of the United States, Barack has his roots in Kenya. Academy award winner, actress Lupita Nyong’o is Kenyan-Mexican.

No blank stares if you mention a Kenyan name in a big deal entertainment circle. That is good news for budding musicians like Wendy Le. Genius, real name Wendy Oginga may have a safe landing.

The young Kenyan student based in McKinney, Texas, is serving proper afro pop already. A genre that people who just peruse through music mistake to be deeply rooted in Nigeria.

Hell no, Afro is Africa with Nigeria and Kenyan in it. Wendy Le. Genius spent most of her life in Kenya but moved to the U.S to further her education. While there, she launched her musical career. Something she treated as a hobby was becoming serious after a couple shows in her town.

She downplays it but her celebrity status is also growing. Her new single ‘dis ya body’ produced by Bieno Tyles is already gaining a hit status.

The 26-year-old Electronic Media student wants her musical star to shine with her Kenyan roots. Nay Sayers can’t tell her it’s impossible because it has been done before. 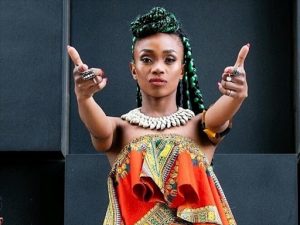 Stella Nyambura Mwangi aka STL is a Kenyan-Norwegian rapper who lives in Norway but the content of her music has kept Kenyan fans hanging with her.

STL’s music expresses the situation of life back in Kenya and the discrimination her family endured after they relocated to Norway in the early 90s.

Yes, STL is a Kenyan entertainer based in a foreign country but big. In 2018 her song was picked as a soundtrack for a top movie and that was the second time she was making waves in Hollywood.

Her song was used in Bad Mom’s Christmas and HBO’s Tv Show Insecure. Her music has been used in other major productions as Save the last Dance 2 and American Pie.

These are heights artists who are serious with their crafts like Le Genius are aiming to hit with the path roughly paved for them.