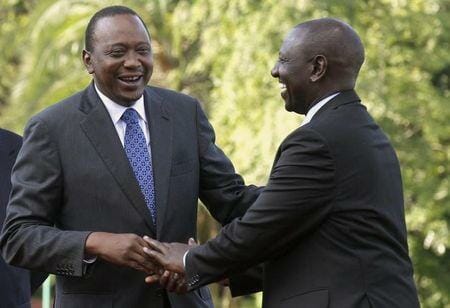 It is feared sugar from the port of Mombasa finds its way to Uganda where it is offloaded, then repackaged as Ugandan sugar and re-exported back to Kenya.
To start with, Uganda has 13 factories. Four major ones that produce 90pc of the total output and nine smaller ones that contribute 10pc of the total sugar output. In 2014, the total production was 438,400 metric tonnes of sugar. The national demand for sugar in Uganda stood at approximately 522,000 metric tonnes per year.
Analysts say this makes Uganda a net deficit producer. Industry players aver, sugars imported into Kenya allegedly from Uganda is actually sugar from Brazil, which finds its way into Uganda principally from two routes through the port of Mombasa.
It is said sugar barons in Kenya have established links in Uganda and may have remotely pushed Uhuru Kenyatta and Yoweri Museveni to fall into their money minting deals. Remember, sugar money has been used in campaigns every year and Uganda is set for polls come 2016 with Kenya following 2017.
In the new clearing set-up between Kenya, Uganda and Rwanda, Kenya Revenue Authority does not inspect goods heading for Uganda. Uganda Revenue Authority is stationed at the port to facilitate its imports.
In short, cheap sugar from Uganda has flooded the country making it difficult for local factories like Nzoia to operate.
The second route is through Egypt to Uganda. It is said the Arab country imports a minimum of 1.5 million MT of sugar annually. This is done by a single government agency called Egyptian Sugar Integrated Industries. This agency then sells this sugar to willing buyers who either export or sell locally.
The Brazil Sugar is cheap because it is hardly taxed. In Brazil, sugar basically is a by-product from ethanol and power production. When exported, it is taxed at 1pc on the cost of production at the port of export. Being a by-product, its quality is normally wanting. The sugar then enters the African markets tax free. Such sugar cannot compete in Africa going by the tax regimes in Africa.
Secondly, Uganda unlike Kenya is not a signatory to the Comesa free trade area. It did not sign the pact as it wanted to protect its local industries, something the current regime in Kenya is not keen to do.
Why isn’t the Kenyan Sugar Cheap?
•Tax regimes in Kenya are punitive. Local sugar is taxed at 20pc of sales price (16pcVAT and 4pcSDL) This raises the price the consumer has to pay for the sugar. These taxes are not levied on imported sugar.
It worth noting, the deficit in Kenya that should be bridged by imports is approximately 250,000 MT. However the same government has gone ahead and licence the importation of over 500,000MT in a market that only needs half of that. This has made local millers to sell their products in an already over flooded market.
This are the reasons as to why, Western MPs turned down an invitation to State House by Uhuru Kenyatta. Going by the events on ground, Jubilee schemes to lure the rich western vote block has suffered a major blow. Infact, it is said, if a politician from the region comes out openly to back the nove, his political obituary will be written.
We have information, Jubilee schemers aware the move is counterproductive and have decided to go slow on the matter. They want the burning issue to die a natural death.
Already the opposition is questioning the timing of the move. Raila Odinga allies say it is a plot by Uhuru to mortgage sugar industry for Kenyatta family giant milk processor Brookside Dairy. Brookside has been buying outlets in Uganda the latest being Sameer Agriculture and Livestock business for Sh3.5 billion.
Uganda owns 49pc stake in Sameer. Sameer group is associated with business mogul Naurad Merali.
Brookside has in recent years acquired smaller processors such as Buzeki which used to manufacture Molo Milk brand, Ilara Milk Company and SpinKnit Dairy, the former producer of Tuzo milk.
Sameer Agriculture and Livestock Ltd – Sall – was established as a joint venture company by the Sameer Group of Kenya and RJ Corporation of India and took over of the former government parastatal Uganda Dairy Corporation in August 2006 according to records.
It is said the current bid between Brookside and Sall has not been received well by a section in Uganda noreso the opposition. The argue, the sale of public assets to foreign firms, for a low price is detrimental to economic growth.
Sameer acquired the corporation shares in 2007 from a Thai-based firm Malee Sampran Plc which had earlier bought it from government at a throwaway price of one dollar during the privatisation process in 2004.
After public protest and parliamentary committee recommendations, government allowed Sameer to run the dairy plant on its behalf for 10 years up to 2017, with the expectation it would then be transferred to a local company.
However, last year Sameer requested for a 50-year-extension to recover its investment of Sh6 billion, which it said was thrice what had initially agreed upon with the Ugandan government. It was granted a 40-year-extension.
Brookside which also had established operations in Uganda prior to latest acquisition, has been at war with milk industry payers.
Sameer’s brands in Uganda are Fresh Dairy and Daima with a range of fruit juices and mineral water. Brookside is also investing in Ethiopia.
Back to sugar politics, it is said Kenyan-based sugar daddies approached Uganda barons to demand full access to the Kenya market-based on the East African Community’s free market rule.
This was on grounds, Kenya has a leewway on sugar imports to protect local mills from competition. But Uganda sugar firms want the Kenya market opened up to help in balancing trade between the two countries, which is currently in favour of Kenya.