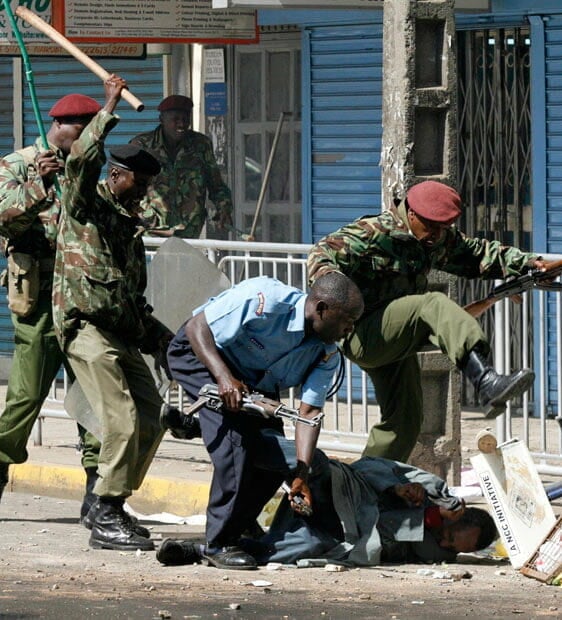 The Video of GSU officers brutalizing protesting UON students has gone viral and become subject of discussion among Kenyans. All all and sundry in Kenya knows damn well that it is better to trust an armed criminal than trusting a Kenyan police officer .

But why is there enmity between Kenyans and police officers? The Problem is not Kenyans: The problem is our system that has dehumanized the police officers and it has become an uphill task to convince many illiterate and brainwashed police officers that they should always fight for the people and not protecting the ruling class that has ensured that most of them remain poor, Living in poor housing conditions like dogs.

Sometimes, Last year, I was arrested for Retweeting something on my timeline after Bob Collymore reported me to CID officers parklands. I was harassed, intimidated and  even told that my Head will soon be chopped off by Mr. Gikunda DCIO Parklands. I reported the issue but with the culture of impunity that is now deeply entreched in kenya, Mr Gikunda was not even questioned.

Our Police have been conditioned to believe that Poor Kenyans are the enemy yet the ruling class is their enemy. Money meant to improve their welfare is looted as they chase after bloggers demanding for change. The police force has now become a tool used to harass Bloggers, confiscate their laptops and investigate Retweets for months.

So when you see Videos of police officers beating/Roughing up Kenyans know that we are in deep Shit. Instead of police officers helping students get a solution, they join forces and start beating poor Students who have genuine issues.

I think the problem is the way most of them are employed. You know in Kenya you must part with a bribe to be employed. That is why, for instance, the flying squad has turned into an extortionist ring  that can be bribed eliminate somebody. The Flying squad is the popular ring that was used to eliminate the Mungiki ..

Meanwhile, we ask Kenyans to be always alert. Always record Police officers harassing any Kenyan and send the videos to us on whatsApp or our email and we will expose  and shame the rogue officers.

Remember you are part of the Kenyan dream and all Kenyans must join forces to condemn extrajudicial killings & police brutality now on the rise after Uhuru and his St Mary’s Classmates took power.

Meanwhile Boinnet is not under control as cartels take over the police force.The police reforms are nowhere!!!!!!