Kenya Power has restored the breakdown of charges in pre-paid electricity tokens as EPRA investigates why it stopped providing the complete bills to customers.

The loss making electricity retailer has reverted to its initial billing format that offered consumers an opportunity to interrogate their payment statements.

The move comes after the company resorted to hiding breakdown without any official statement to consumers.

Since early this month, consumers have been receiving payment statements through their phones without a breakdown of charges like the monthly variable items like fuel and foreign exchange adjustments expenses combined as one.

Hiding the breakdown made it difficult for customers to establish whether the charges on their bills matches the unit prices for various items like tax, regulatory levies and all other charges with the data published by Energy and Petroleum Regulatory Authority (EPRA) every month. 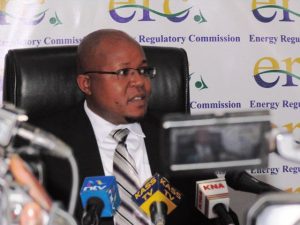 EPRA is currently probing why Kenya Power has been denying pre-paid consumers a breakdown of their electricity bills.

But it later resorted to combining all these charges as other charges in payment statements sent to the mobile phones of it’s over six million customers subscribing to its pre-paid billing systems.

Kenya Power is blaming it’s high charges to a weak shilling and heavy reliance on diesel-powered generators to produce electricity.

The company further laid  claims that the low water levels in the country’s hydro-electric dams have also led to the rise in fuel surcharge and forex adjustment costs.

Kenya Power was recently on the spotlight for giving preference to expensive thermal power over cheaper options like geothermal and hydro hence setting up consumers to higher electricity charges.

In September, EPRA data showed that the electricity distributor had opted for the expensive thermal power for over a year to reserve the lowest slot for the cheaper geothermal power.

The move saw consumers pay higher fuel cost charges influenced by the share of electricity from diesel generators which is Sh2.6 per kilowatt-hour, up from the Sh2.4 in May 2020.

The new bills will now reveal how much consumers will pay to finance Epra not long after the Energy ministry led by Charles Keter had pushed to have the levy hiked.