Kenya has been beaten by Somalia, which has the most affordable mobile internet in Africa and seventh worldwide this year according to a survey conducted by British technology research firm Cable which established the average cost of 1GB of mobile data in 228 countries in 2020.

“Somalia has the cheapest data in Africa where 1GB of data costs Sh53 on average from Sh662 last year, it is seventh in the world. In East Africa, Tanzania is the leading country with citizens paying Sh78 per GB for the service,” the report states.

The Business Daily quoted Abdiaziz Duwane Issak, the Director- General at the Ministry of Posts, Telecommunication and Technology in Somalia saying that they have improved regulation of the communication sector.

“The National Communications Act, which was passed in 2017 paved the way for further development and increase of investment for the telecom industry. A unified licensing framework was also developed which protects the competitiveness of the market and encourages more investment in the sector. Another factor is the reduction of taxes to attract more investment and innovation. All those factors led to establishment of a competitive market and a high certainty for more investment in the sector. Therefore, the consumer’s choice is increased to more efficient low-cost services provided by the operators,”

The study shows that despite a drop in internet costs to Sh112 this year from Sh114 last year, Kenya requires deeper investment in infrastructure to lower the cost of internet for its citizens.

All East African nations are ranked in the top 100. Tanzania and Kenya are followed by Rwanda, Uganda and Burundi in the affordability index where people pay Sh160, Sh175 and Sh228, respectively.

Netizens of Malawi and Sao Tome and Principe pay the most for data, at Sh2,960 and Sh3,052 for every 1GB,respectively.

India and Israel have the cheapest data in the world, costing Sh9 and Sh11 respectively, while Kenya’s cheapest data for the survey done last February was priced at Sh28 with the costliest one retailed at Sh1,100. 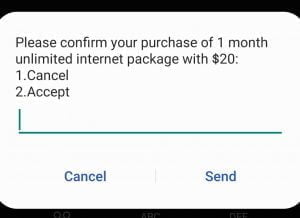 A screeshot showing a prompt to purchase unlimited data in Somalia

A separate study shows that despite Africa’s efforts to make data affordable, where 12 countries rank in the top 50 list, the digital quality of life (DQL) in the continent has deteriorated.

Kenya emerged at position 77 out of 85 countries, beating Nigeria and Algeria in DQL but  was unable to surpass the technological convenience in South Africa, Morocco and Tunisia in the past 12 months.

“Kenya has better digital government services available than Morocco, Indonesia, Nepal and other countries. But when it comes to cyber security, Kenya comes 68th. E-security has the strongest correlation (0.89) with the DQL. Focusing resources on improving a country’s cybersecurity and protecting people’s personal data would have the greatest impact on their digital quality of life. During the first month of the lockdown, 49 of 85 countries experienced deteriorated speeds of mobile internet. Internet speed, both mobile and broadband is higher in countries with high ICT adoption rates and internet usage,” the survey points out,” the report states.

“People in 75 percent of the researched countries have to work more than the global average to afford the internet,” the study discloses, ranking Kenya 74th in the internet affordability index, only above Nigeria in Africa.

As of 2020, nearly half of world population is still offline even as talks of inclusion regarding digital transformation gains ground.

“Eventually the cost of data will come down but that may take time because we have few mobile internet service providers in Kenya. But cloud storage will soon be very affordable as more global providers like Google and Amazon Web Services, Microsoft Azure make their presence known to local consumers,” said Timothy Oriedo, chief executive of Predictive Analytics Lab in Kenya.

While the World Bank Digital Report of 2019 ranks Kenya’s internet speed second in sub-Saharan Africa at 10.1 megabytes per second after Madagascar, digital transformation in the country is still plagued by unstable data and a relatively low smartphone penetration.

“The government through the Communication Authority of Kenya is looking for ways to make smartphones affordable,” said ICT Cabinet Secretary Joe Mucheru during the Telkom-Loon 4G internet launch last June.

Kenya, which is now betting on balloon internet that relies on aerial transmitters to bring down the cost of data and boost access to underserved regions during the pandemic, still needs to work on its cyber security resilience, having lost Sh29.5 billion to cyber gangs in 2018 alone, according to cybersecurity consultant Serianu.