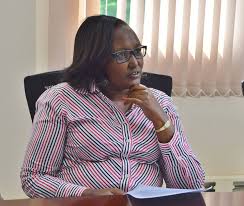 Margaret Rugut Kibogy, OGW: The Managing Director of Kenya Dairy Board since May 2016

This comes even after parliament had denied the existence of ‘a Bill circulating on social media platforms titled ‘Milk Bill 2019’ that purports to regulate the production and sale of milk by farmers to consumers and other third parties.

KDB on their part said that nthe proposed bill has been suspended to allow for consultation.

‘The Kenya Dairy Board wishes to inform all stakeholders, that the processing of the proposed regulations has been suspended to allow for consultations and further public participation,’ the press release said in part.

Below is the full Text of the documents signed by KDB Managing Directror Margaret Rugut Kibogy, OGW.

Our attention has been drawn to the public concerns on the proposed draft dairy regulations 2019.

It is noted that some comments made through various media outlets are misinterpretations of facts and intentions of the regulations.

The Kenya Dairy Board wishes to inform all stakeholders, that the processing of the proposed regulations has been suspended to allow for consultations and further public participation.

We wish to thank all our stakeholders and the public in general for the feedback received.

In this article:Kenya Dairy Board