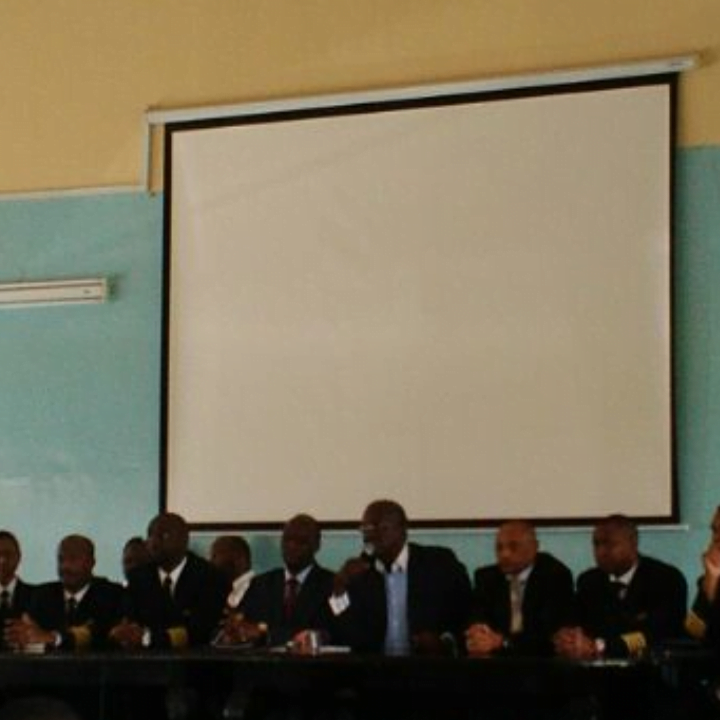 Caption: Meeting being addressed by Transport CS James Macharia and KQ Chairman on-going now. They are requesting 3-4 weeks time to “resolve” issues but pilots don’t trust Government officials who are known pathological liars. Why should it take 4 weeks to sack 5 officials? Strike is still on.

Happening as we speak is a strike called by pilots of Kenya Airways under the banner of Kenya Airlines Pilots Association (KALPA) who had called for the immediate resignation of CEO Mbuvi Ngunze.

In typical Government of Kenya arrogance, the transport CS James Macharia who oversaw the rot in the medical sector before being moved to the transport ministry, has yesterday resorted to cheap threats and intimidating tactics, using court orders and bogus press-statements.

KALPA officials led by Captain Njoroge Murimi, Captain Paul Gichunga and Alban Mwenda had been bribed at the Attorney General’s office to call of the strike whilst signing some dubious deal which will eventually see the airline collapse.

But after he realised his mistake, Gichinga retracted his earlier mistake, fearing reprisal and the wrath of his colleagues who had threatened to call a special general meeting and eject the three KALPA office-bearers who signed the inferior deal.

“All flights outstation are to proceed as normal with the intent of flying aircraft back to the Nairobi base. There shall be no departures from Nairobi at or after noon,” said Gichinga in today’s statement, directly opposite what he signed yesterday after being bribed at the AG’s office.

He added that pilots in outstation hotels should notify the association if thrown out. He said KALPA will work with IFALPA affiliates to offer assistance and organise the purchase of return tickets.

As we speak, the board Chairman Hannington Awori and Transport CS James Macharia are at a meeting appealing for more time to “help resolve” the issues, a tune that pilots are getting tired of hearing. They want the CEO out like yesterday.

The pilots also want the Human Resource Director, the Flight Operations Director and the Chief Pilot to be dismissed, failure to which they will continue with their strike. They cannot understand why the Government is so keen on defending Mbuvi Ngunze, at the expense of the airlines diminishing stature.

Media covering the meeting have been bribed not to give concrete information and live updates by Mbuvi Ngunze, and they are there pretending to cover the event. There are no updates on Twitter from the bribed mediocre media houses.