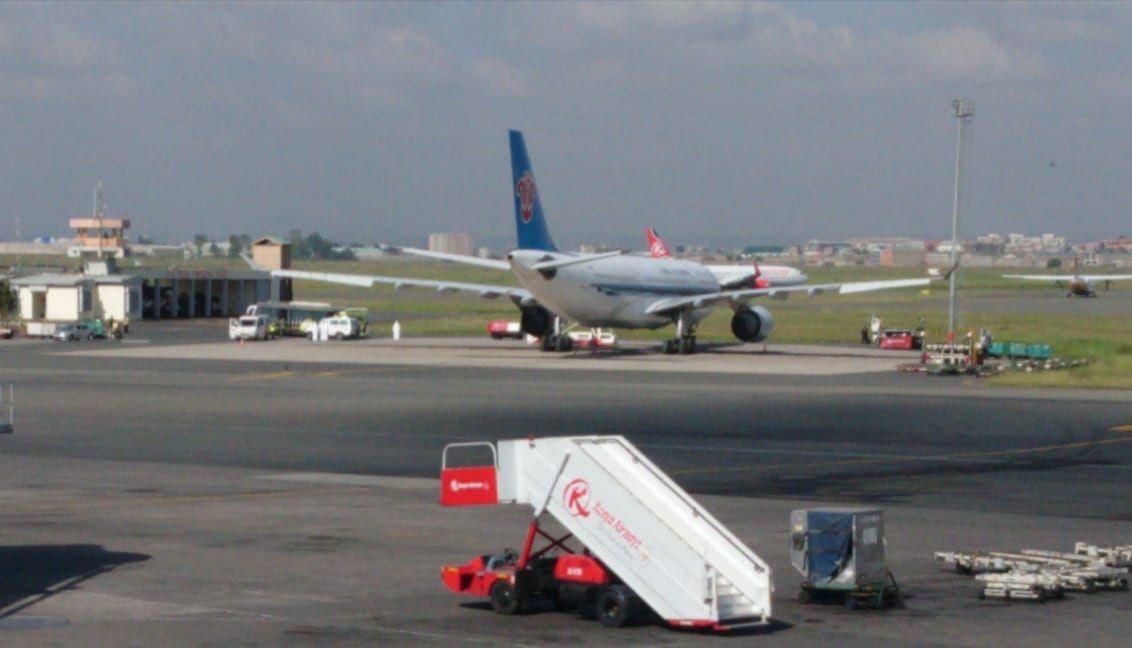 The aircraft: From a distance u can see porthealth guys

This afternoon Kenya Civil Aviation Authority (KCAA) released all the passengers and crew from the Southern China Airlines aircraft that had been quarantined at Jomo Kenyatta International Airport (JKIA).

The plane which was put aside in a very secluded area of JKIA for screening over concerns of coronavirus had been detained at JKIA for more than 3 hours.

‘These people will bring this disease into this country, why are they doing this?’, a staff member told cnyakundi.com

KCAA is said to have released the plane after media pressure waned.

Kenyans are concerned that Kenya Airways banned its flights to and from Guanzhou China yet China Southern Airline still manages to land unabated in the country.

Nonetheless, It is even more ironical how KQ still flies to other parts of China, picks passengers from China in UAE and brings them to Kenya.

Kenyans should not rely on media houses which don’t do research and only rush to demonise people like Cyprian Nyakundi.

It is imperative that Kenyans now stand up for themselves, run a campaign online against the carelessness of the government allowing the China Southern Airlines coming to Nairobi.

They should land in a secluded and not busy airport like Isiolo or Wajir and then get screened in the desert (stay there for awhile) and only when it is confirmed they are not having coronavirus, should they be allowed into Nairobi.

Worse still, doctors say that the virus has a 2-week incubation period so it seems we are fooked.

Kenya doesn’t have the capacity to deal with the virus that has killed over 500 people and infected tens of thousands others.

This joke should end. NOW.

In 2018, ubeknown to many is that when Ebola broke out in Democratic Republic of Congo (DRC), the govt of Kenya as usual didn’t ban flights into Kenya from DRC.

There was an incident at JKIA where an aircraft from DRC was quarantined in the same spot the China Southern Airlines was today.

When passengers disembarked the health officials at the port immediately noticed that two displayed Ebola-like symptoms. They put them on an ambulance and rushed them to KNH.

KNH management refused to admit them and even quarantined the medics who had brought them for some days in the same ambulance until they were cleared.

This saved Kenya some Ebola outbreak.

In 2002, the Daniel Moi government refused entry of 137 Ugandan delegates into Kenya for fears of Ebola which was then afflicting that country.

The 137 Ugandans were in Kenya as delegates to a conference on regional security. They were put on buses, and police escorted them across the border.

Why is Jubilee this careless? For money? China loans?