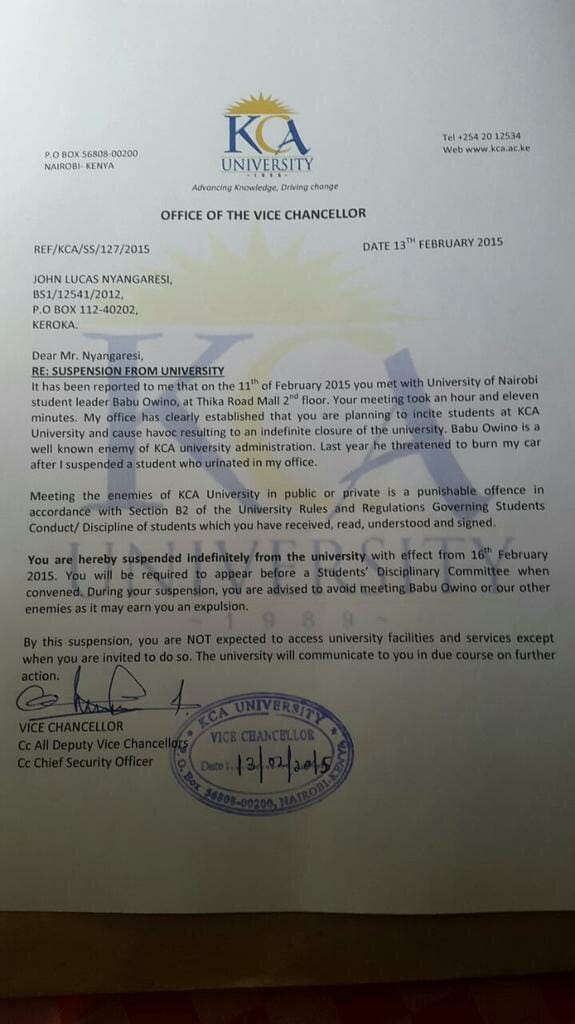 13th of February 2015 is one month John Lucas Nyangaresi will live to recall for the rest of his life. That is when he was given his suspension letter by KCA University. The letter that I have shared has been signed by a man who claims to be the Vice Chancellor but does not act like one.

Nowadays, the Professors – Who happen to be a shame to the world of creativity are suspending students over personal issues.

Adolescent leadership is crippling our institutions and it is time to say enough is enough. What if everyone starts suspending students because they met with their perceived enemies ? It is very unfair to end or delay someones education over petty issues. We cannot start suspending everybody based on suspicion.

We demand that Nyangaresi is reinstated without conditions because there is no reason why he is being suspended according to my views. University is not a military camp. Or… Nyangaresi should transfer to a better University not that Toilet with leadership that is centuries behind times .  Failure to take this student back, We will hire a lawyer to know the ROT the University wants to hide from public limelight.

And the Adolescent leadership in KCA must start acting like people who have brains . This is just wrong  . Here is the Suspension Letter

I am still following the case and will update