Former Prime Minister Raila Odinga’s wife Ida Odinga held a fundraiser at a Nairobi hotel on Friday towards her over Sh300 million Library to improve learning facilities for students at her former school in Homa Bay.

Ogande Girls High School will benefit from the state of the art library which will be part of a complex with a research centre and 1,000-seat auditorium. The facility will also contain an ICT hub, a recording studio and conference facilities.

The Dr Ida Odinga Library, Research, Innovation, and Resource Centre is designed to take the shape of an eye – to symbolise the gateway to knowledge and the importance of truly ‘seeing’ in our day-to-day activities.

To make the dream a reality, Ida is proving that she can ask for the money get it especially from the political class, including the least expected and it is proving successful. 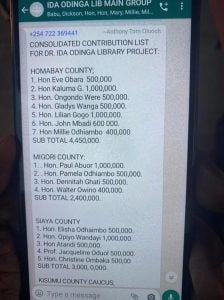 The vocal and controversial lawmaker once made news as the first member of Kenya’s national assembly to be mentioned by a woman on the Facebook page ‘Dead Beat’.

When sued, Kaluma argued that his salary could not cater for the child’s upkeep though he could manage school fees and health.

At the time, he claimed he was earning less than Kshs. 51,000 due deductions for loans and mortgages.

But now with information going round that the Mp in his second term eying the Homa Bay senatorial seat in 2022, through ODM where Raila’s backing is as good as clinching the seat itself, Kaluma had to break the bank.

Many professionals and 2022 aspirants from the Luo Nyanza counties also sent their contributions in efforts to actualize Mama Ida’s dream and at the same time cement their proximity to the Orange party.