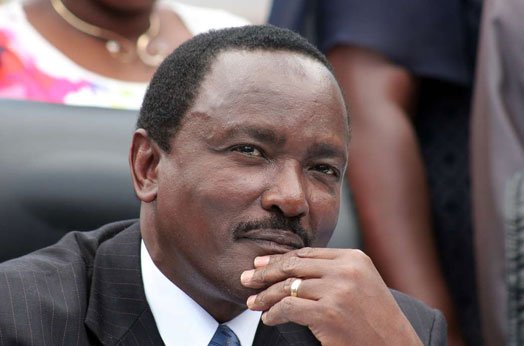 Wiper leader Kalonzo Musyoka has for the first time revealed the main reason behind his unreserved support of the Jubilee administration following the March 9 handshake.

Speaking on Sunday in Kajiado, Kalonzo said he felt alienated after Raila Odinga left him in the cold after the publicised truce.

Kalonzo was Raila’s running mate in the August 2017 general election. His Wiper party is a key affiliate of the NASA coalition alongside Moses Wetangula’s Ford Kenya and Musalia Mudavadi’s Amani National Congress.

“We were completely left out in the dark, and not to know where we were leading as opposition after the captain exited the ship on waters filled with crocodiles,” Kalonzo said.

He was speaking during the homecoming ceremony for the Kaputiei North ward representative, Joshua Olowuasa.

The event was attended by area governor Joseph ole Lenku and other elected leaders.

The former Vice President said he forced himself into government after he realised he had been sidelined after the handshake.

“No one called me into government but I forced myself inside to skip irrelevance. The handshake was good for a politically divided country like Kenya at the time,” Kalonzo said.

“I am inside there, and as a member of the handshake team led by Uhuru, I am supporting it,” he added.

On July 28, the Wiper party’s National Executive Council resolved to directly work with Uhuru “in his effort to transform Kenya”.

The party said it was satisfied with the president’s efforts to fight corruption and pledged to support his development agenda.

The party said the political situation in the country had stabilized and therefore a total closure of the electoral season.

Kalonzo has since appeared in several government functions alongside Raila.

On Sunday, Kalonzo said the Kenyatta-Raila unity pact means well to Kenyans and any other person standing against the two leaders is an enemy of Kenya.

While responding to those questioning the nature of working relations with Uhuru, Kalonzo there were no pre-conditions ahead of his decision.

“I do not have any deal with President Uhuru Kenyatta, I’m on the negotiating table. My commitment now is building bridges and help in healing this country,” Kalonzo said.

He said lauded Uhuru’s appointment of Keriako Tobiko the Environment CS saying he is doing a good job to increase the country’s forest cover.

Kalonzo said all Kenyans of goodwill should stand with Tobiko in preserving the country’s environment.

“I will always stand with the Maasai fighting for their land rights,” he added.

Governor Lenku said he should be credited for initiating the handshake.

“After I was sworn in as Kajiado governor, I first took upon myself to unite those in opposition with Jubilee and even appointed some county ministers from the opposition,” Lenku said.

Kajiado East MP Peris Tobiko, however, took issue with Lenku over what she termed interference of resources in her constituency.

Lenku did not, however, stay through her speech as he left immediately with Kalonzo.

Tobiko claimed Lenku’s administration is messing up her people by plundering resources and denying them access to sand harvesting.

“Let me be clear on this, any leader no matter his position, who comes in between my people and their resources, we will deal with him the best way we know,” a visibly angry Tobiko said.

Lenku had earlier briefly spoken about the lingering hostilities between the Kisonko, Kaputiei and Matapato communities over sand on the shared border along Eselenkei River,

“I am aware of the problem and I have told the communities to use their elders and resolve the issue,” Lenku had said.

“Do not push me to the wall on this matter because I do not want to order your arrest. Anyone found to be dividing people along clanism will be arrested and charged for incitement,” Kipkemei said.