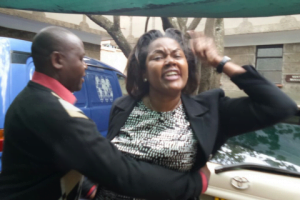 Senator Otieno Kajwang’s second wife Faith Vivian Otieno claims she has been cut off by her husband’s family. She also says, her children are unable to access money raised by Kajwang’s friends for their education, According to The Nairobian .Kenyans recall how Faith bitterly stormed Lee Funeral home demanding to view her late husband’s body and the dignified silence at the funeral in Homa Bay that lit up social media and won her an army of supporters. Three months on, she says her relationship with the family seems to have grounded to a halt after Kajwang’ died. For the past two weeks, Faith claims, she has been forced to beg and plead with Kajwang’s brothers to send school fee for her daughter, who cleared Form Four last year but can’t join college. “What is painful is that a harambee was held to cater for the education of Kajwang’s children. Yet right now, my daughter is at home. She can’t go to school even though somebody somewhere has the money that was raised for the children,” states Faith. Fundraiser She accused the late senator’s brothers of frustrating her and playing hide and seek over her late husband’s estate. “I had to fight for over three weeks to get some money from that family so that my son could go back to university. What’s wrong with these people?” posed Faith. After Kajwang’ died, there was a fundraiser which was meant to cater for children of the late Homa Bay during and Sh6.7 million was raised. She has never seen a penny, she claims.
She reveals that she met Kajwang’ in the early 1990s. “He just stopped me on the streets and we struck a conversation. He was a young lawyer back then who had nothing but ambition. At the time, I had just started a business which was picking up well. He later informed me that he was formerly married, but that his wife had left him and, therefore, he was single and searching. He was witty, and I fell for him,” says Faith. She reveals that the first house she shared with Kajwang’ was bought through a Sh800,000 loan she took from her sister and slowly paid off. “It is the same house his brothers stayed in – house number 41, Phase Two, Komarock. They knew their brother had no money and that I was the one supporting everyone in that house. But now they have turned their backs on me as if I was merely Kajwang’s girlfriend. I am his legal wife,” says Faith. Dowry payment Kajwang’ traditionally married Faith in 1993 in a ceremony called nyombo (dowry), after paying 12 cows and Sh60,000, when his first wife Rose left for the UK. It is said that Cord leader Raila Odinga was among those who accompanied Kajwang’ to pay dowry. “All I want is upkeep and school fees for the children. I am tired of fighting. They would not even let me view my husband’s body. They didn’t even acknowledge my children. My children were so embarrassed because they were being treated like lepers during the funeral, as if they were bastards. “I was married to Kajwang’ for 19 years and we got two children – Christie, who just completed high school, and Ronnie Odinga Otieno, 19, who is in university. I wonder what those men want to do with the money. “I am the one affected most because I lost a husband and my children lost a father. Those men are all independent and all of them are in gainful employment. Why are they fighting a widow and her children?” asks Faith. She says her in-laws have been referring her to Rose, Kajwang’s other wife. “What business do I have with Rose? I wasn’t married to her, and I didn’t have children with her. The only thing we have in common is the fact that we were both married to the same man