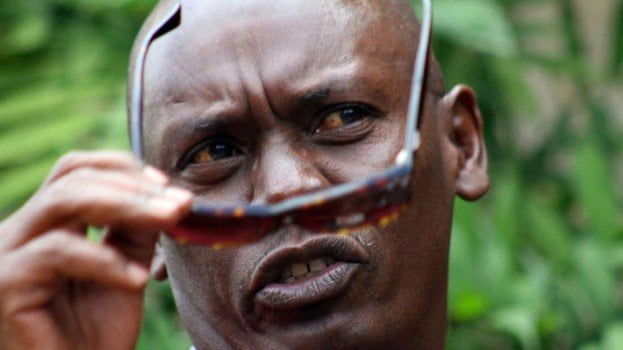 Former Kiambu Governor William Kabogo has said that he does not give any credence to allegations that his immense wealth is linked to drug trafficking.

Kabogo said that he made his money through hard work, dismissing allegations that he has a hand in the illicit business.

“In the 1990s, I used to import cars. Then you needed a license to import cars. I remember my last shipment of cars from Japan to here, was a whole vessel with 175 cars. So if you are making Sh100,000 per car, how much is that? Big-time money.

The former governor said he also used to supply commodities to supermarkets.

“I am the one who started the Eastleigh market…Here I am, clean as snow,” Kabogo told Anne Kiguta on the Punchline show.

The former county chief disclosed that his net worth is in tune of billions. He also confirmed owing a chopper that he said he purchased at slightly over US$2million (Ksh200 million).

Incidentally, Kabogo claimed that it was the use of his chopper during campaigns against Stephen Ndichu in the Juja Constituency that led to allegations that he was involved in the drug business.

Kabogo denies claims that he played a role in the impeachment of his successor Ferdinand Waititu.

He said that Waititu’s case at the Senate was spoilt by his own lawyers, whom he accused of incompetence.

“First he needs better lawyers. If he behaves as he did in the Senate, he will go to jail. How are you charged and you don’t even present a case for yourself?” asked Kabogo.

The former governor said that since his defeat in the 2017 elections, he has kept a low profile choosing to focus on personal businesses.

“I have no connection at all with MCAs. I only know two MCAs. I went out of my way to keep out politics of Kiambu until further notice.

Kabogo also had a word of advice for the newly-sworn in Kiambu boss, Dr James Nyoro.

“From his body language yesterday [Sunday], he needs to be very careful. To start shouting and throwing people out of rallies. I was looking on social media today (Sunday), I am seeing him arriving at a BBI meeting on a helicopter, what? On day one! I hope it is not on county money,” said Kabogo.

On the Building Bridges Initiative (BBI), Kabogo said that Constitution should not be changed to create positions for people and allow extension of terms.

Kabogo said that President Uhuru Kenyatta should just retire after the expiry of his second term in 2022.

“How young is too young? Obama is home and is slightly younger than Uhuru,” said Kabogo.

If the BBI is to create a new Kenyan, Kabogo said it would be fitting for all the top leaders Uhuru, opposition leader Raila Odinga and Deputy President William Ruto to pave way for a new crop of leadership.

“There should always be presidential term limits,” said Kabogo.

On his relationship with DP Ruto, Kabogo said he considers him a friend but does not support his presidential bid for 2022.

“He is my friend because I have no reason to be enemies with him. I don’t support his presidential candidature for 2022 at the moment. It is too early to discuss elections. I have said that It is William Ruto and Raila Odinga who can cool the temperatures of politics in this country.

Kabogo said the two antagonists need a handshake of their own if they want to bring Kenyans together.

“You will see every day, every week that it is about them. Conflict is the main thing between them. When is that we will bring Ruto into the fold so that we can discuss development,” said the former Kiambu governor.

Kabogo said he is also contemplating running for President using a third force to counter the Raila and Ruto machinery.