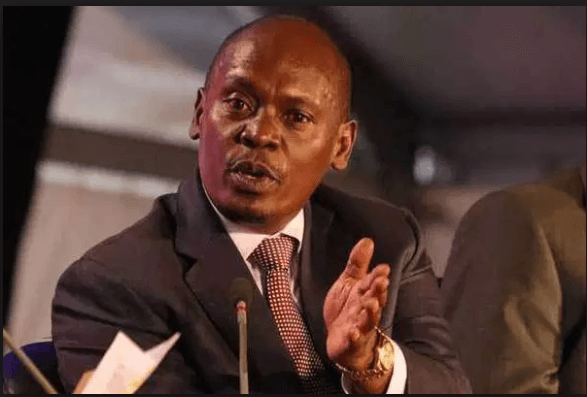 To absolve himself from scandal, Kiunjuri yesterday asked Ethics and Anti-Corruption Commission (EACC) and Director of Criminal Investigations (DCI) to immediately commence the prosecution of those who have been receiving undue payments that should have gone to farmers.

Further information reveals that cartels infiltrated the process by colluding with CPBB officials and swindling over Ksh. 2 Billion after taking advantage of poor reading systems. The cartels are still demanding for more than 1 Ksh. Billion

In a presser, Kinjuri only shifted blame to EACC, DCI, the press and his critics that he referred to as, “haters” something that has angered the socials leading to the birth of the social media hashtag #FailedKiunjuri

In his presser, Kiunjuri seemed to attack William Kabogo by claiming that he was using the maize saga scandal to resuscitate his failed political career. Kabogo had once criticized Kiunjuri by saying that being a CS is not just wearing sharp-shooters and speaking in Kikuyu parables

“To my haters, I have listened to you carefully, even on social media. Some of you are politically frustrated. You look for anything to make yourself relevant. I assure that when the right time and moment comes I will deal with you. I rest my case,” the CS said.

Here are some Tweets from the socials

#FailedKiunjuri
The same Kiprop Maiyo was allegedly also found to also be a supplier in Kisumu with over
32,000 bags of maize at a cost of Ksh.7million.

#FailedKiunjuri In Nyandarua and with one Gov @GovFKimemia are allowing such packing of potatoes! And a sack goes for 1000/- only. This is modern day slavery! Should NOT be allowed! @WilliamsRuto @UKenyatta pic.twitter.com/dI3TP3FQc1

Instead of showing leadership he is holding grudges with people who dont even rival him. Farmers continue to suffer while he is making cheap threats and I am sure he speaks like that because he is looting#FailedKiunjuri

@DCI_Kenya, @ODPP_KE follow #FailedKiunjuri and the maize story is all there. Kenyans telling it as is.

Accordingly, the Select Committee of the Senate, which is investigating the crisis facing the
maize sub-sector, was told on Thursday that 10,636 suppliers had delivered their maize to
the Board. #FailedKiunjuri pic.twitter.com/XJE56aZEL9

It's only in Kenya where a president will complain about a non performing cabinet secretary and expect the public to sack him. The reason why #FailedKiunjuri hashtag is a waste of time is because Ruto controls the maize politics

Sugar and Maize farmers are suffering because of corrupt official in the agricultural sector. We are in a mess, we need to have ways of dealing with this mess #FailedKiunjuri pic.twitter.com/S5wxomgtP7

SOME FACTS HERE #FailedKiunjuri
In Nakuru, 18 farmers supplied more than 10,000 bags. However, nine were found to be dishonest. "Out of the 18 farmers vetted, nine farmers were disowned by the chief of Rongai whom they had indicated in application for maize purchase forms

#FailedKiunjuri
The Oners is on the CS to name all those involved in Maize cartels pic.twitter.com/KbIy163Elw