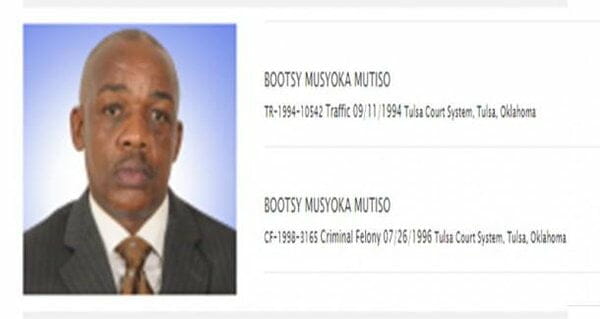 Kenya Airports Authority board chaired by former Inspector General of Police David Kimaiyo is at a fix following revelations that one of its board members is on the US list of wanted persons. The KAA board is yet to take a common stand over the matter.
Already, businessman Bootsy Mutiso has been gazetted as KAA board member but following new development, he may after all not assume office after it emerged he is on the America’s watch list and a wanted person by a US-based Tulsa Court. Sources say the court issued a warrant of arrest against him on June 23 1998.
He is also facing charges of allegedly obtaining goods by false pretence on July 26 1996 and upon committing the crime, sources say he left United States of America back to Kenya.
According to court records, the warrant, which is still active, was issued two years after he left the US jurisdiction. Effectively, if Mutiso travels to the US, he risks being arrested and prosecuted to face the charges in a case filed under number CF-1998-3165 by the Tulsa Court.
His appointment to the KAA board was published in the Special Issue of the Kenya Gazette, Vol CXVII-No 43 published on Monday April 27 2015.
This raises concern as to whether the state conducted any due diligence before picking on Mutiso to ensure it complied with Chapter Six of the constitution on leadership and integrity.
The matter has been further complicated when it emerged that Musyoka was gazetted as Joseph B Mutiso while the KAA website has the names of Bootsy Musyoka Mutiso.