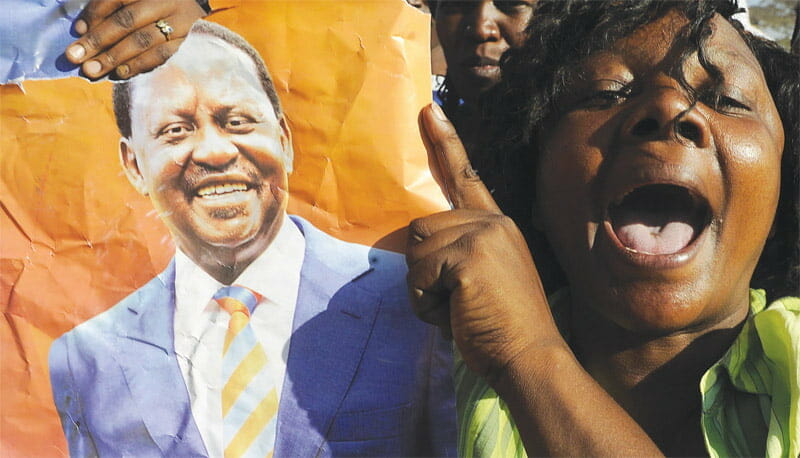 As Raila keeps on putting pressure on the Jubilee Government, The Jubilee Strategists are coming up with ways to silence him so that he can be silenced.

To silence Raila , we have information some of his graft-related cases  will be revived.

Plans are underway to reopen some of the cases that Raila had thought he was done with. One such case is that of the Sh3.2 billion Kazi kwa Vijana scandal where billions went into the pockets of individuals, the maize scandal, grabbing of the multi-million molasses plant at Otongolo in Kisumu, alleged grabbing a 50-acre piece of land in Kiang’ombe, Nairobi and 500 acres of land in Mombasa.

The molasses plant ghost will be brought back to haunt Raila. The wedge Jubilee plans to put between Raila and his core support base of Nyanza being that whereas the late Robert Ouko saw it as a vehicle to deliver Luos from gnawing poverty; Raila saw it as an opportunity to make a kingly fortune for his family.

Ouko’s murder cut short  attempts to revive the complex until Raila showed interest after the government advertised its auction in mid 1990s. Raila, representing Spectre International, and who had then started flirting with then President Daniel Moi bid for the plant for Sh570 million and was subsequently declared the highest bidder.

Raila was to learn that he had no claim to 240 acres of land on which the Kisumu Molasses plant stands, according to the auctioneers. Sources now say Raila duped thousands of Luos to buy shares in the molasses and to date; they have never received a single penny as dividend and no one has the courage to face Raila and demand their sweat’s fruits. It is estimated that at least Sh72 million was collected locals in Nyanza.

Plans are now underway to take Raila to court to compel him to pay dividends to those who bought shares or to have them refunded their shares. At the time of the purchase of the plant, Raila appointed the late Joab Omino and Odeny Ngure, former Rarieda MP, to collect money from locals, purportedly to buy them a stake in it. But because the suit must be filed by a member, it is feared that no one will come forward as then they will have to flee Nyanza for their dear life.

Raila could also face another charge on irregular acquisition of land since the molasses land had been compulsorily acquired by the government from local farmers to pave way for the creation of the complex and now residents want their land back but Raila has refused to compensate them. It is for this reason that Raila’s name featured prominently in the Ndung’u Report that documented individuals who irregularly acquired state land.

Another scam whose ghost could easily haunt Raila is the Triton Oil scandal. In 2009, Raila was also mentioned as one of the beneficiaries of the scandal through Spectre International Limited.

The Kazi kwa Vijana scandal case is also set to be revived. It happened when Raila was the prime minister in the coalition government when his office was also accused of misappropriation the project funds.

To silence him further on his call that the Jubilee administration under President Uhuru Kenyatta and William Ruto is tribal, sources say, a team is currently working on a comprehensive list of individuals Raila had appointed to various positions when he was a minister under Moi to the time he was in office as PM. He has been accused of dishing out public jobs to his relatives and children, and a claim that his tribesmen dominated the PM’s office.