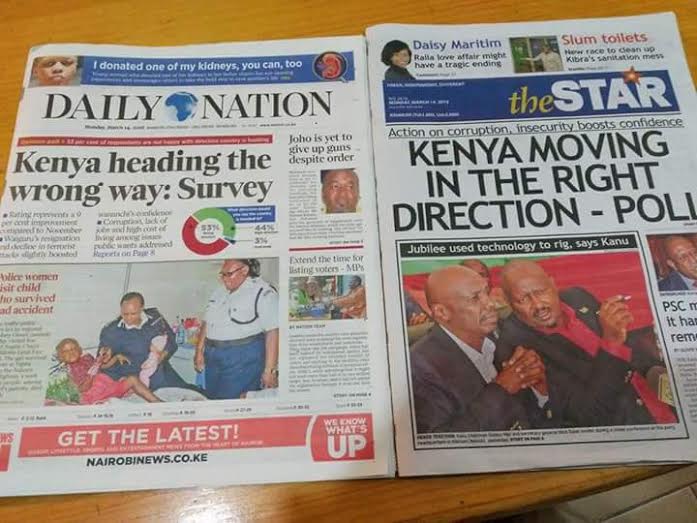 Jubilee mole and functionary Oliver Mathenge whom we have previously called-out as an incompetent scribe working at the behest of The Jubilee regime is today in the center of a row following his editorial pattern. A similar article praising Uhuru and misquoting a poll was written by the same journalist on August 13th 2015, showing how standards of media in Kenya have been compromised.

The opinion poll in question was released yesterday b Infotrack, where it’s founder Angela Ambitho said that 53% of Kenyans believe that the country is headed in the wrong direction. It baffles everyone why Oliver Mathenge twisted that headline to suit his pocket, using a Newspaper that purports to be essential-reading for smart people.

Oliver Mathenge uses his platforms on social-media to cleverly sanitise Jubilee’s graft, by engaging his followers in mediocre discourse, and purporting to win arguments based on trivialties and technicalities. He blocks or goes mute on those that are intellectually superior than him and only engages with fellow simple minds.

And while we have previously exposed @KenyanPundit, @RoomThinker @ColdTusker @KResearcher for subliminal sanitising of Jubilee’s graft, Oliver is less covert and not shy of declaring his stand, which could not be bad because for instance in the United States, media houses are largely divided on political ideology. MSNBC is viewed as pro-Democrats while FOX has always been pro-Republicans.

However even with the liberalised media set-up in the United States, none has ever gone to the level of manipulating opinion polls as Oliver Mathenge has done, for the sake of political-expediency. The article has embarrassed The Star Newspaper so much, that they have pulled it down from the Web.

We are also informed that executives from the Star conveniently turn a blind eye on this professional incompetence, as it likes leveraging on Oliver Mathenge’s proximity to his fellow alcoholics and chain-smokers occupying big offices. 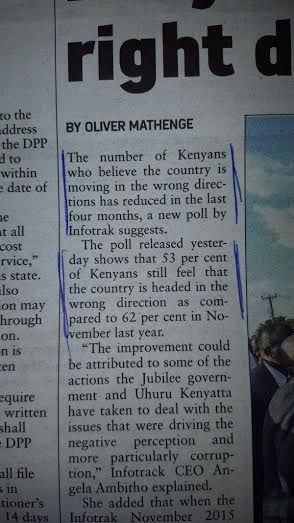