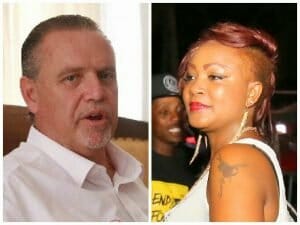 Taita Taveta Woman Rep, Joyce Lay, is facing divorce from her Mzungu husband over what the couple calls ‘irreconcilable differences’. The s3xy politician, who rose to fame after she accused Turbo MP, Elisha Busienei, of s3xual harassment during a foreign trip to Tokyo, Japan, left her husband’s home several months ago due to frequent domestic wrangles.

Joyce’s husband, William Lay, who is a former CEO at CMC Holdings, has filed a case at the Milimani Law Courts saying that their union has broken down and is untenable.

“All efforts at reconciliation have been futile and the parties have been living separately for a considerable amount of time”. A source close to the embattled couple revealed.

In the petition, Lay claims that there are no reasonable prospects that the marriage can be salvaged. He doesn’t want anything to do with the s3xy Taita Woman, whose beauty always leaves men salivating.

Joyce met her husband during an event for the 1998 bomb blast victims and the couple walked down the aisle in 2007. They have been married for only 7 years.

The matter is now before court but meanwhile the s3xy Joyce has separated from her husband and this is good news to thirsty men.