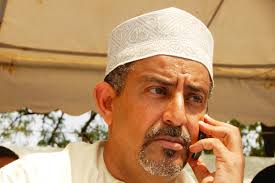 Mombasa politician Suleiman Shahbal has hinted that he may decide to throw his weight behind Hezron Awiti for the port city governorship if he gets convinced that the MP has good chances of clinching the seat.
“Mzee Shahbal will back Awiti for governorship if he establishes that the Nyali MP has sufficient support across the county. He has even personally conveyed the same message to the MP,” said a close associate of the 2013 governor aspirant who gave Governor Hassan Joho a run for his money.
It was not immediately clear what Awiti’s reaction was but suffice to say such an arrangement would be a Godsend opportunity for the Nyali MP.
Shahbal is politically bruised after all his avenues and schemes to dethrone Joho were thwarted. He spent millions of shillings in the courts seeking to overturn Joho’s election to no avail.
Joho’s degree saga which he later pegged his hopes on after the defeat of other judicial processes to have the governor’s election declared null and void has also since fizzled out.
And perhaps, the last nail on Shahbal’s political misfortunes was when he made a surprise decision to defect from Wiper to the nascent Jubilee Alliance Party which has no known followers in the port city.
Even TNA and URP supporters in Mombasa have since disowned the new political outfit whose national chairman is a Rabai political activist Nelson Dzuya.
To make matters worse, Uhuru Kenyatta overlooked Shahbal and other Jubilee operatives in the port city when he made appointments to the parastatal sector a few months ago.
But what does Shahbal support portend for Awiti in case it comes to pass? Political observers on the ground say a combination of the two politicians would send Joho home early in the morning.
Shahbal has a substantial following among the Swahili-Muslim voters who still believe his victory was robbed by Joho. If he directs this support towards voting for Awiti, it will be a huge boost for the Nyali MP who is banking heavily on the Mijikenda and upcountry votes.
But observers believe Joho cannot afford to let the two politicians work together. It is said the Mombasa governor is an astute schemer who knows how to penetrate his opponent’s political camps and disintegrate them.
Already, Mining cabinet secretary Najib Balala is on Joho’s side and being an Arab like Shahbal, he would be useful in disengaging the huge Swahili-Arab vote from Shahbal’s dominance if need be, it is being pointed out.
In the last general elections, Shahbal who was a Wiper governor candidate got a huge boost from Mombasa Kamba voters. Analysts say that Awiti who is a Wiper MP and the party’s national treasurer would be the automatic choice in 2017.