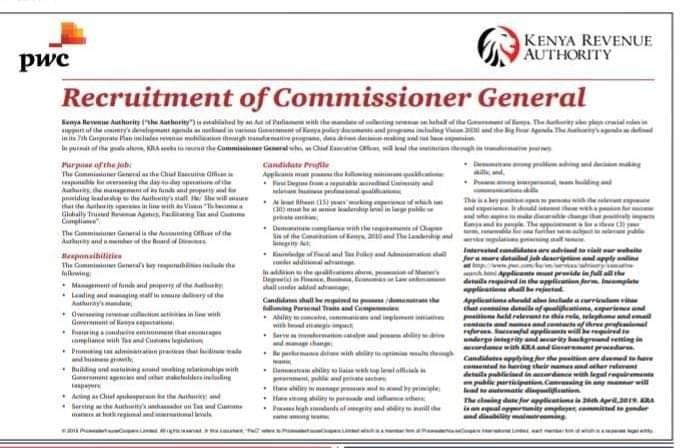 The Kenya Revenue Authority (KRA) on Monday advertised the position of the Commissioner General.

As the curtains falls for the Kenya Revenue Authority (KRA) commissioner General John Njiraini, we at Cnyakundi.com look back at his tenure marred by looting, incompetence and abuse of office.

Njiraini who took office in March, 4th, 2012, has had his tenure extended haphazardly to allow him take care of his businesses meaning, ‘put his looting looting businesses in order’.

It is open knowledge that this guy run other businesses on the sides, contrary to Kenyan laws, to enrich himself.

Njiraini led a parastatal that always missed the target, had junior staff ‘eating’ in broad daylight.

Below we cover some of the shocking scandals at KRA during Mr. John Njiraini’s tenure:

In August 2018, detectives from the Directorate of Criminal Investogations (DCI) were following a lead where KRA employees had stolen over Kshs 100 billion in just six months. The tax evasion racket that happened at the prt of Mombasa saw rogue KRA staff collude with unscrupulous traders to facilitate false declarations to deny the taxman requisite taxes such as import duty. They also allowed in counterfeits in exchange for kickbacks.

Other agencies such as the Kenya Ports Authority (KPA) and Kenya Bureau of Standards (Kebs) officials were also in the mix.

The KRA wanted to implement the Excisable Goods Management System (EGMS) which was given to a Swiss firm SICPA Securities Solutions.

This arrangement meant that consumers would pay more for imported goods while the SICPA management smile all the way to the bank, for no apparent reason.

SICPA was to get Kshs. 1.50 which was to be added to the excise tax on bottled water and juice, to be shouldered by the consumers. This was a Kshs 17 billion contract.

This was however suspended indefinitely in July, 2018, after Consumers Federation of Kenya (COFEK) and some members of parliament opposed.

The question I often ask is, ‘what if we always beat our tax collection targets, but the crooks at KRA declare less revenue collected, how would we know the truth?

Now, during Njiraini’s reign, there were cases open cases of tax evasion. I don’t mean it wasn’t there in other commissioner’s time. But during his reign, some companies such as the mobile brand Oppo were engaged in tax evasion.

In the Oppo case, Njiraini is said to have received Kshs. 40 million bribe to look the other way.

BAT would bribe KRA officials to disclose tax returns of its competitor Mastermind Tobacco so that they can increase Mastermind’s tax burden.

This and other scams cost the state billions of shillings in lost revenue.

Even though President Uhuru Kenyatta, in 2015, ordered a lifestyle audit on KRA staff. None is any has been jailed to date.

The looting will continue even with the new Commissioner general, thanks to a president who utters big words but does nothing. Hawa wezi wamemgundua, hawezi uma.

Finally, it is public knowledge that Mr. Njiraini has used his position to intimidate businesses and business partners.

In the recent case, Njiraini is accused of intimidating Mr. Njama Wambugu, a partner in the Space & Style Limited, a tile company valued at Kshs. 1.3 billion. The two had differed over shareholding.