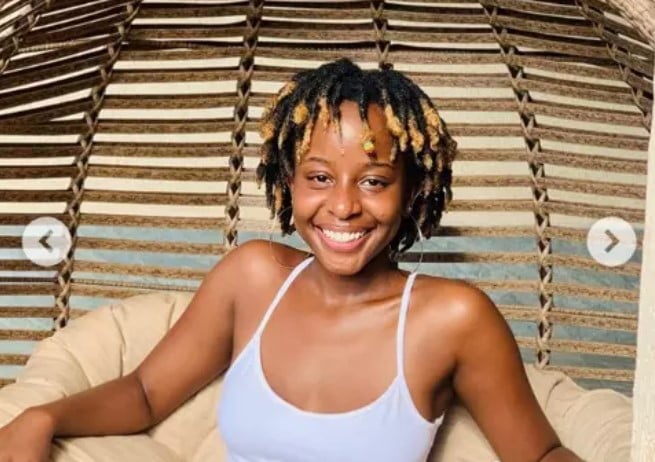 This past weekend, a rich Nairobi teenager identified on her social media platforms as Joan Kubai sent netizens talking after she decided to entertain her Snapchat viewers with a grand tour around her parents’ palatial Runda home, taking more than 10 minutes to walk around their house as she proudly showcased the lift, six bedrooms, four sitting rooms, numerous balconies and the lush green compound surrounding the mansion.

The modern kitchen, her family’s special room designated strictly for folding clothes, massive walk-in closets, a library placed in the artic, numerous balconies and countless bathrooms spread across the residence were some of the few unique features which sent the ever-reactionary Kenyans abuzz.

During the virtual tour, Joan Kubai took her followers through every room in the house except for her parents’ bedroom.

On Monday, the internet was awash with startled users who were still trying to digest the beautiful sight they had seen on different platforms.

The heavily circulated video easily qualifies to be part of the global ‘Rich Check’ challenge (users flaunting various valuable possessions including cars, houses and large sums of cash) that has taken over social media platforms in recent weeks.

Joan Kubai later took to her Twitter handle to express her surprise after finding herself as one of the top trends in the country.

“You guys should stop. You all are killing me,” she remarked.

As Kenyans jokingly engaged and made comparisons between the stunning mansion seen in the clip and their own bedsitters and rental apartments, the famous online detectives had already assumed their positions and soon enough it became apparent that Joan Kubai is the daughter of city tycoons Peter Macharia Kubai and Isabellah Wairimu Kubai. 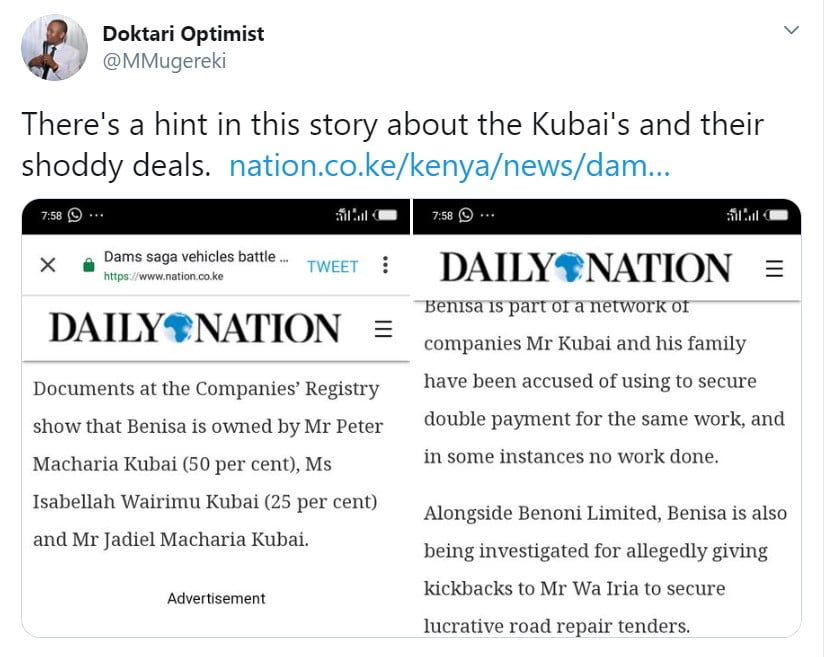 According to a Daily Nation publication from December 2019, Peter Macharia Kubai and Isabellah Wairimu Kubai are joint directors of Benisa Limited, a firm which at the centre of two separate investigations by the Ethics and Anti-Corruption Commission (EACC) into Murang’a Governor Mwangi wa Iria’s alleged violation of the public procurement law and ghost projects in the county.

Benisa had been hired by the now-bankrupt Italian firm CMC Di Ravenna on May 15, 2015, as a subcontractor to do a number of works on the Itare dam project for Sh360 million.

At the time, the Italian firm accused Benisa of deploying inadequate staff and resources on-site and terminated the contract on June 22, 2018.

The company is believed to be part of a network of companies Mr Peter Macharia Kubai and his family have been accused of using to secure double payment for the same work, and in most instances, no work done.

On this basis, Benisa Limited was, for instance, paid twice to construct a single water pan at Kangutu in Kakuzi Mitubiri ward.

While digging up through the file, sleuths from EACC also stumbled onto Benisa Limited while investigating the stalled Marsabit Stadium, where the firm was paid over Sh88 million with only 20 per cent of the work done.

On July 30, 2019 Benisa Limited obtained a default judgment in a suit it filed against CMC Di Ravenna to recover Sh31.5 million for rock blasting works it did in the Itare dam project, which has also collapsed and is at the centre of a Directorate of Criminal Investigation (DCI) probe.

All the three are said to be business associates of Murang’a county Governor Mwangi Wa Iria.