My name is Ike James Osanya Alali. I was a student at the University of Kabarak but raising fees became an issue so I decided to hustle. Now, I was employed at Java House on 23rd March 2016, on probation for three months before permanent confirmation.

On 5th June during my shift, which usually started at 7pm till 7am, I was at work as usual, and at 3pm I left for Greenspan Branch to make the normal deliveries. Having carried alot of merchandise for the several branches in the Central Business District, the loader of the truck, accidentally left 20litres cooking oil can at Greenspan branch, when it was meant for Kenya-Re, the new branch at Kenya-Re building.

Editor’s Note: Kenya Reinsurance Corporation is the insurer of insurance companies and at one point, Peter Kenneth, the man who purports to be an angel, almost sold it to Zimbabwe Reinsurance, in a deal brokered by Gideon Moi, another Kalenjin thief. Kalenjins are such thieves that Kipchoge Keino, Stephen Soi, Francis Paul and other officials from the National Olympics Committee of Kenya (NOCK) stole from their fellow Kalenjin athletes during the recently-concluded Rio Olympics.

Back to Java, the misplacement of the 20 litres of cooking oil created one unnecessary mess. Me and my loader were taken as suspects and suspended for a week. Later, we went for hearing at the HR office in Westlands, at ABC place, and were asked to narrate the whole scenario as it occurred on the 5th of the same month. After the hearing which had a recording, i was asked to go home and communication was to be made. A day after, they called me on the 22nd of June, and to my surprise, I was being called for termination letter due to an “unsuccessful probation.” The case of misplacement of cooking oil was not blamed on any of us because there was no legal evidence showing that we were culpable.

My issue here is, if it was unsuccessful probation as terms of my dismissal, then they should have evaluated me and told me in a month’s time, rather than just keeping me in the dark and telling that I didn’t pass probation three days to the end of it. 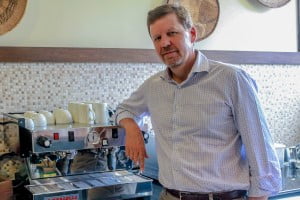 As if that wasn’t enough, they have a problem with paying my overtime dues. I once talked to their legal department and their representative lawyer told me that they don’t have an overtime policy. Their employment contract states that one should work for only 8 hours a day, but I used to do 12 hours or sometimes when the warehouse production wasn’t working in scheduled time, I would end up closing duty at 13 hours, or more. When I last visited their office, the finance lady did a calculation of my overtime and it totalled to Kshs. 147,000.00

This situation aggravated me to file a case, so I approached my schoolmate, who had graduated from law-school, who offered to assist, but all letters that we address to Java legal department, largely go unanswered. I have the recording of the case hearing. I have the termination letter, and my employment number was 3410. Now we are waiting for them to respond to the judges call to court.

Cyprian, I don’t trust the Kenyan judiciary system because these guys have a lot of cases at court and I doubt if I will ever get justice. Time will pass by and when technicalities are introduced in courts, cases are thrown away. Kindly help me expose these Java guys, as I was a driver, and there are many other drivers and other staff members who just have suffered at the mercies of this Java management.

Hereby attached is the termination letter. 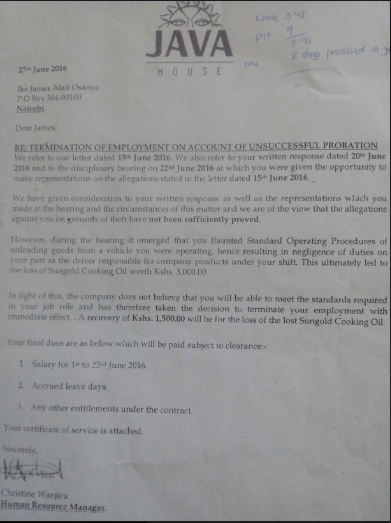 For all who may not know, Nairobi Java House is headed by Kevin Ashley, an American resident who has married a Kalenjin lady. He is rumoured to have instigated the arrest and hostile takeover of shared owned by his former partner John Wagner. Kevin is so connected that President Uhuru Kenyatta appointed him to the Taskforce on Coffee Reforms, a committee that was a total waste of Taxpayers money. The committee which had no farmer representation on its board, included bastards who have no background in coffee like Paul Kubo, a former owner of web-hosting company 3 Mice. 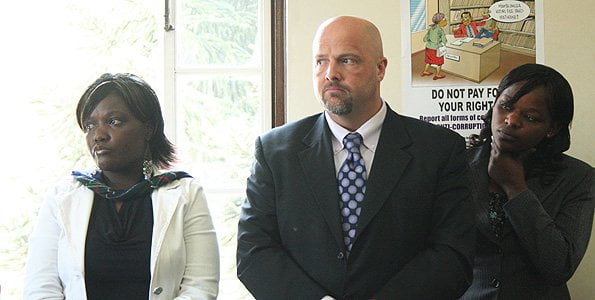 CAPTION: Former Java House boss John Wagner who was rumored to have been arrested at the instigation of and his shares hijacked from him by his parter Kevin Ashley. Wagner was accused of defiling a minor.

Kevin doctored the Taskforce on Coffee reform report to ensure that recommendations suit his business, including tax-breaks on import of coffee brewing equipment. The taskforce was another sham of a publicity stunt, engineered by the PR Guru himself President Uhuru Kenyatta. One would imagine that since his community Kikuyu benefits greatly from coffee, that he would at least pay mind to the industry woes. But Uhuru doesn’t give a shit about poor farmers. He only cares about his St. Mary’s pal’s.