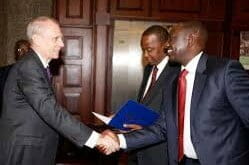 Controversy surrounding a multi-billion shillings medical research project in the country Kemri/CDC has assumed a new angle after it emerged that the earlier reported loss of Sh.7.6 billion was a ploy to facilitate an exit plan to neighbouring Tanzania.
Investigations reveal that no such amount was lost at the medical research body at a time when most whites had curiously relinquished their top positions to unsuspecting Africans.
According to multiple insiders, the announcement of the loss of such whopping amount was stagemanaged to paint Africans as corrupt before the body is moved to Tanzania.
CDC-Atlanta and Kemri came together in agreement that gave birth to Kemri/CDC project and was being sponsored on a budget of Sh7.6 billion for a period of five years.
The deal dubbed collaborative agreement for this financial year was signed in 2010 and was supposed to end in August this year.
It is during this time that a host of other sponsors came into the picture with a view of taking care of different activities ostensibly to avoid duplication.
However, the ghost which is currently haunting over 700 black employees can have its ugly head traced to the period when a former director Kayla Haserson strategically moved an idea that would see account department put in one pool.
Unlike before when every activity had its own account department, other top leadership which was by then dominated by the whites never questioned the complex move.
The financial drama started when at some point most of the donors ran out of cash and therefore failed to wire funding for their activities a move that forced accounts department to spend money on irrelevant activities, a negligence on account department that continued for a long time without being reported.
One of the technical advisers raised the red flag when he asked for money to roll out his activities and got surprised on learning that his account was reading in the negative despite the fact that his donor had promptly channelled the cash.
It is at this point that the whites who were in top leadership foresaw danger and immediately lured their black counterparts in the looming problem by paving way for them to head top positions.
For example, Kayla who is currently hiding in India relinquished her superior directorial position to John Vulule while malaria department which was initially headed by Maghna Desai was given to Simon Kariuki.
A position, chief operations officer, was quickly created and handed to John Ndege an office which all of a sudden became powerful.
However, all these were a well thought longterm strategy which was to put Africans into the mix as both Dr Ndege and Dr Vuvule were immediately sent on compulsory leave at a time that saw the unceremonious sacking of over 700 employees.
Head of finance Sam Agutu and his accountant counterpart Henry Makala are also on suspension this despite the fact that Ndege being the chief operations officer furnished CDC with information about donors that owe them.
CDC refused to contact the donors to confirm or to ascertain the allegations against them but instead opted to dismiss African leadership as corrupt and have since taken their fight a notch higher by contracting spies to monitor social life of the suspended employees.
The spies have even taken photos of houses owned by Africans in a struggle to craft evidence they want to table in the ongoing investigation at the research centre.
Ironically, a white woman only identified as Rebbeca has remained in her position and approves all the expenditure despite being in the web with observers now pointing out that the whole drama is being stagemanaged by the CDC management, to warrant relocating to Tanzania.
Away from financial scandal, the CDC management has struggled with a host of allegations ranging from racism to sexual scandals with white males in top positions said to be prying on young Kenyan girls in exchange of jobs.
Another white was hastily moved to CDC Uganda after it emerged that she assaulted a driver who declined to ferry her car from Nairobi to Kisumu using CDC cargo lorry without the authorisation of the management.
The development at the research body has seen negative impact of the country’s economy with Kisumu and Siaya emerging as the worst hit given the massive jobs scale down.
Former workers at the institution who used to live in posh estates particularly Lolwe estate have quickly resorted to low end houses same to their children who are now back to public schools as opposed to before when they went to academies.
In the meantime, Kemri/CDC future remains bleak given the fact that a team that has been appointed to unearth happenings at the troubled research centre is headed by one Barack Sungu whose integrity has been roundly questioned.
Sungu, a former internal auditor at CDC Kisumu, according to our sources was earlier moved to Nairobi on corruption allegations and it came as a surprise to many when he was introduced as the head of investigations.
During his tenure at the Kisumu branch, Sungu formed a habit of calling and intimidating suppliers in anticipation of kickbacks.
One Odada Sumba is said to have furiously protested Sungu’s comeback but the matter was ignored by the CDC management which seems to be comfortable with him despite questions on his integrity.
The big question that has since remained unanswered is how the operations moved smoothly between 2010-15 when budget allocation for that period of Sh7.6 billion is what is stated to have been squandered.
“Where did workers get their salaries? How was fueling of vehicles being made and how were they paying those monitoring the field?’’ posed a dejected former employee.