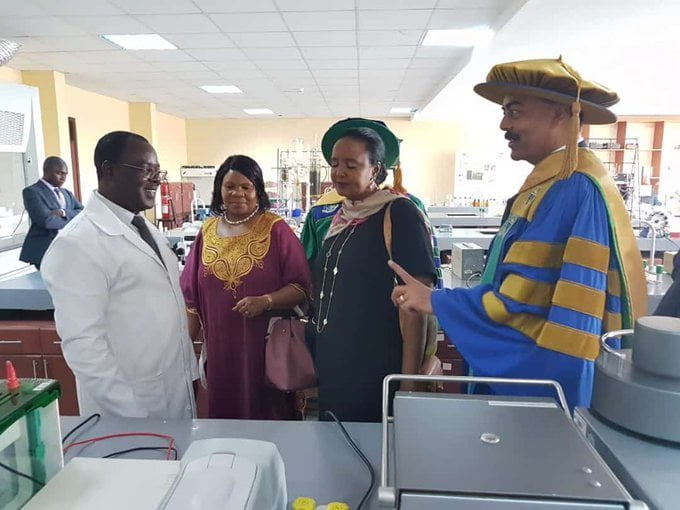 Chancellor of Jaramogi Oginga Odinga University of Science and Technology (JOOUST) Vimal Shah together with CS of Education Ambassador Amina Mohammed being taken round the school. They will be launching the new science complex lab | 2018 – Twitter

In August 2017, several students were asked to face the senate over alleged forgery of Finance stamp that enabled them to sign the nominal roll and later acquire EXAM CARDS.

The students faced the senate on the first week of September 2017. On this fateful day, I remember vividly, having TRUST on the student leadership dubbed SAJOOUST – Students Association of Jaramogi Oginga Odinga of Science and Technology, they lured the accused students to ACCEPT the charges against them so that they can be FORGIVEN. Now, the students were called in groups of 10s since they were many and the charges were read in whole so yours was to say NO or YES. Those who said YES were allowed to move out and those who said NO were given a chance to EXPLAIN themselves. After a very long wait, they later told us to WAIT for the VERDICT after 14 days.

Months rolled out. Majority lost hope but a FEW trailed through the semester BUT didn’t manage to sit for the exams of academic year 2017 DEC because they had been BLACKLISTED in the SYSTEM. This is when the rubber hit the road and it lingered that all was not fine and things were THICK.

On January 2018, we received a call to go pick our VERDICT letters. Mind you, the calls were not made on the same day. Since these are Kenyans who don’t hail from the same places and the same financial status, you couldn’t expect them to PICK the letters on the SAME exact date and time.

The VERDICT said, YOU HAVE BEEN EXPELLED but you have 14 DAYS to APPEAL the ruling. Now, those who managed to APPEAL were reinstated with a condition that they RESIT the exams of semester 2 which ended 2017 APRIL when the said SCANDAL had hit them. On top of that, you MUST pay for each single UNIT an amount of 6800KSH. meaning if you have like 10 units on that semester, you had to PART with around 68000KSH to put things under the carpet.

The truth of the matter is, a majority of students who were EXPEL

The truth of the matter is, those who were EXPELLED were NON-LUOS. and that just a handful managed to APPEAL on time otherwise it was a well-orchestrated deal for DVC ACADEMIC AFFAIRS by the name BOSIRE who EXPELLED those students. Now, the best is if possible we get a lawyer. Thank you

In this article:Jaramogi Oginga Odinga of Science and Technology