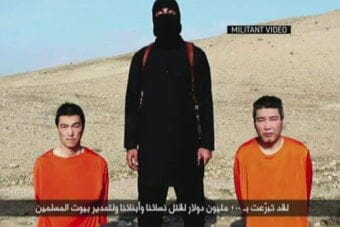 Japanese prime minister Shinzo Abe has admitted it is a “race against time” to free two hostages snatched by Islamist militants who are demanding $200 million for their lives.

A defiant Mr Abe said he would not bow to “terrorism” as he took charge of the crisis that Japan was thrust into with the release of a chilling video apparently showing two Japanese men kneeling in the desert of Syria or Iraq.

“This is a very tough race against time, but the government will do its utmost,” he told reporters.

“I have ordered the government to use all diplomatic channels and routes possible … to ensure the release of the two people.”

Mr Abe, who rushed home from a tour of the Middle East, said he had sought help from Palestinian leader Mahmud Abbas, as well as from Egyptian president Abdel Fattah al-Sisi, Jordan’s King Abdullah and Turkish president Recep Tayyip Erdogan.

“Japan will never yield to terrorism. Japan will do its best in the battle against the cowardice of terrorism, hand in hand with the international community,” Mr Abe said.

The self-styled Islamic State (IS) militant group has murdered five Western hostages since August last year, but this is the first time it has threatened Japanese captives.