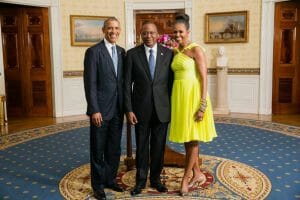 In 1994 or early 1995 the still unknown Barack Obama sent his editor at Times Books, Henry Ferris, the first two-thirds of his memoir Dreams from My Father. He told Ferris that to complete the book, he had to return to Kenya to do some research. The evidence strongly suggests that Obama went not to Kenya to do that research but to the local library to do some borderline plagiarizing.
In the way of background, Barack and Michelle Obama visited Kenya in the summer of 1992 and married in October of that year. There is little dispute about the timing of either event. After the couple’s west coast honeymoon, Obama decamped to Bali for a month to finish the book on race and voting rights he had contracted with Poseidon, a small imprint of Simon & Schuster. He couldn’t do it. Simon & Schuster lost patience. In the summer of 1993, the publishing house cancelled the contract and asked that Obama return at least some of the advance.
As Peter Osnos tells it, Obama’s agent Jane Dystel did not give up. She solicited Times Book, the division of Random House at which Osnos was publisher. He met with Obama, took his word that he could finish the book, and authorized a new advance of $40,000.
According to David Maraniss, the Pulitzer Prize-winning author of Barack Obama: The Story, Obama submitted the first draft of what was now a memoir to Crown editor Henry Ferris. The draft did not include the final section of the book, which would cover Obama’s 1988 Kenya visit. Before completing the book Obama returned to Kenya or so he appears to have told Ferris.
Writes Maraniss, who interviewed Ferris, “Obama traveled to Kenya a second time for further research before turning in the last part of the book.” The language here is clear. Obama traveled to Africa after the first submission but before the final one. This trip could have been no earlier than 1994 and not much later. Dreams was published in July 1995.
In gathering information for his Obama biography, Maraniss was able to question Obama in the Oval Office. Obama obviously trusted him. In the interview, Obama confirmed the visit to Kenya, which he said was a “fact-checking” trip that enabled him to do “more background on things like Kenyan history.”
As he has often done, Maraniss left a potentially revealing story on the table. According to all accounts, Obama made only two trips to Africa before his election to the Senate in 2004: the first one in 1988 recounted in Dreams and the second one with Michelle in 1992.
In Maraniss’s report of the Oval Office interview, Obama makes no mention of Michelle accompanying him on the fact-checking trip or of the date of the trip. Besides, in 1992, Obama was still under contract with Poseidon to write a book on race and voting rights.
There are a few possible explanations for the obvious holes in this account. An unlikely one is that Ferris incorrectly recalled Obama’s return trip to Kenya, and Obama compounded this lapse by confirming it in his interview with Maraniss. A second possible explanation, intriguing but also unlikely, is that Obama did make a third trip to Kenya in 1994 or early 1995 and chose not to reveal it beyond his inner circle.
A third possibility, and the most likely, is that Obama lied to Ferris about making a return trip to Kenya, possibly to show how serious he was about writing the book and getting his facts straight. Instead of going to Africa, Obama — or his writing partner — may have contented himself with going to the local library and pillaging the memoirs of longtime Kenya resident Kuki Gallmann. This is the thesis proposed by Shawn Glasco, a tireless researcher into all things Obama. Obama’s evasions about his Kenya research trip make Glasco’s theory all the more credible.
Two of Gallman’s books intrigued Glasco: the 1991 memoir, I Dreamed of Africa, later made into a film with Kim Basinger, and the 1994 collection of stories, African Nights. Although the title of the 1991 memoir more closely resembled Obama’s, Glasco found a wealth of shared words and concepts in the 1994 book, African Nights. Gallman, for instance, tells the reader of a certain fellow. “He was a little man with a perennial grin” and a “readiness to obey or volunteer for any work.” His “sentences often became tangled in a painful stutter.” In Dreams, Obama meets a man just like this: “He was a short, gentle man with a bit of a stutter; he did odd jobs.”
On reading sentences like this, the reader has to ask: Did Obama really know such a man, or has he borrowed from Gallman’s experience? Any number of distinctive local words and phrases show up in both books

On the fashion front, both books have young women “wrapped” in their kangas and “dressed” in “rags.” The women in both books wear shukas, head shawls, head scarves, goatskins, and balance baskets on heads graced with “laughing smiles.”
On the animal front, men in both books spearfish in “ink-black” waters and hunt by torchlight. Elephants are seen “fanning” themselves, birds “trill,” insects “buzz,” weaver birds “nest,” and monkeys “mesmerize.” The books share a veritable Noah’s ark of additional fauna: crickets, crocodiles, starlings, dragonflies, cattle, lions, sand crabs, vultures, hyenas, “herds of gazelle,” and leopards that can hold small animals “in their jaws.”

On the flora front, the shared references are just as compelling: roadside palms, yellow grass, red bougainvillaea, pink bougainvillaea, fig trees, shady mango trees, thornbrush, banana leaves, Baobab trees, liana vines, tomatoes. The landscape, occasionally “barren,” is rich in “undulating hills” whose “grazing lands” are dotted with the occasional “watering hole.” The “mud and dung” houses feature “thatched roofs” “verandas,” and “vegetable gardens.”
People seem to be carrying “straw mats” everywhere. The stars “glint” and people “waltz” underneath them. Eyes “glimmer” in the light of “campfires.” Children sing in “high-pitched” rhythms, and girls endure “barbaric” circumcisions. Obama, like Gallmannn, travels to the Great Rift Valley and stands at its edge. Both visit the small trading town of Narok.
If Maraniss wants to be taken seriously as a biographer, he has to start asking the questions he has so far avoided, starting with who wrote Dreams and how did it get written.