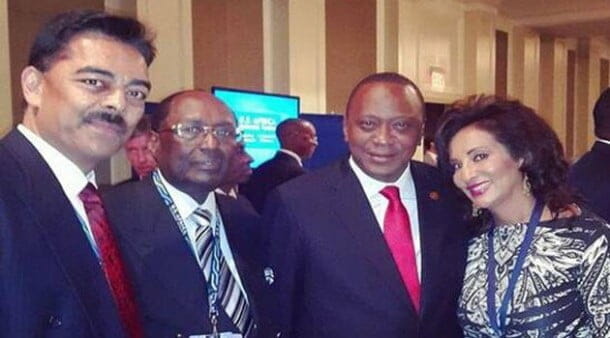 Members of the Wazee Malaya Sacco have reason to celebrate after their founder Chairman and lifetime member Chris Kirubi was rewarded with a plum job as Chairman of the Brand Kenya Board. No member of Team Mafisi was lucky enough to be recognised, fuelling cries about the double-standards President Kenyatta is applying when dishing out state-jobs.

“As regards to promiscuity, Team Mafisi and Wazee Malaya are at par. Why can’t our members also be rewarded with state jobs?” their chairman asked.

Uhuru said that this appointment reflects the will of the people and is in line with the Jubilee Government’s vision of creating jobs for retiree’s and senior citizens. Others who were appointed were Francis Kimemia and retired Police Commissioner Hussein Ali.

Mr. Kirubi’s excellent performance at Jeff Koinange’s Bench two weeks ago may have caught the President’s eye, who rewarded him for a job well done. We do hope that Mr. Koinange will get a cut for using his platform to elevate octogenarians from retirement into active duty.

It’s yet another sad week for The Star Newspaper reporter and habitual-bootlicker Oliver Mathenge who missed out on all the appointments this week, beginning with the post of Government Spokesman that he had been promised years back. Despite altering an opinion poll report by Infotrak and using a misleading headline to suit his mentor Uhuru, the scribe is now counting his losses, as he ponders whether to drink a whole bottle of Jameson neat or go on sabbatical.

“Why does Uhuru keep doing this to me? Is it coz I’m black?” Mathenge wondered.

No sir, it’s nothing personal. You’re just young, unpredictable and the regime requires people whose growth and potential it can manage. Idiots like Dennis Itumbi that hail from far-flung villages and whose greatest aspiration is to own a car, some property and TV slots. You’re way much better than Dennis who is eating off your scraps i.e Jacquie Maribe. The sooner you realise that these old men are just a bunch of scumbags, the better it will be for your depleted confidence levels.

Other Jubilee bootlickers that missed out on an appointment include the usual panel of frustrated feminists Betty Waitherero, Njeri Thorne, who perhaps need to snap out of their delusions of one day hearing their names mentioned in the media.

Many other Jubilee sycophants that don’t allow patrons to drink in peace at their resident local bars, because of always singing and shouting Uhuru!  Uhuru! Uhuru! , also missed out on appointments. Tonight will definitely be a good outing for bar owners as they cash in on frustrated individuals drowning their sorrows.