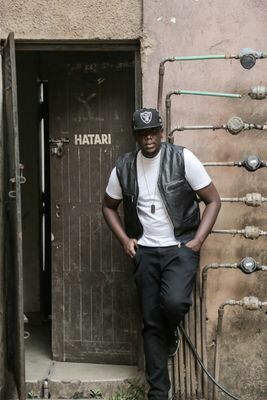 CAPTION: African Castro, the conman who demands cash and sex from prospective models.

Anita Nderu never ceases to amaze. Weeks after presiding over a sham audition process where she was declared “winner” , the career rape-victim is on the spot again.

True to the feminist nature of suppressing talent and elevating mediocrity, Anita Nderu and the Hits Not Homework crew invited the grandson of former President Mwai Kibaki, to discuss about his “struggles” as a model. Yes. You heard me right. Even former President’s kids know the struggle.

Also invited was his manager African Castro, named as one of the biggest conmen in the industry.

Castro had a modeling agency called Platinum Modelling where they posted like 3 years ago they needed models. Many unsuspecting victims inboxed them and they planned interviews. The only two questions that were important to him were if models can pose naked and when they would pay the Kshs. 5,000.00 “registration” fee.

His office was located at City House, 3rd floor opposite Tratorria. His partner in crime went by the name Ezzo. They would lie how they’ve met Jay-Z as a strategy to lure in naive young girls, where they would make money and still bone them.

He took the 5,000.00 from many unsuspecting victims and promptly closed shop. But weirdly, corporates and event companies still engage him, and media still invites him for interviews, meaning that it’s all one big cartel.

So “Capirro” decided, you know what, let’s mock Sheila Kanini and lets bring dear sweet Sean Andrew Kibaki and say how he has had to pay bus fare and sleep without a meal so as to save up for a shoot. Surely this are some of the shenanigans we should put a halt to. This guy is as fake as they come. 2 minutes in the industry and thinks he knows everything.

Capital FM best exemplify the cartel mentality which has permeated through corporate Nairobi, where friends and cronies are given preference over merit. The practice has also been perfected by Scan-Group.

Now we have Anita Nderu throwing herself at Sean Andrew Kibaki. The desperation is real! A sign of low self-esteem. Weren’t you hugged as a child Anita?