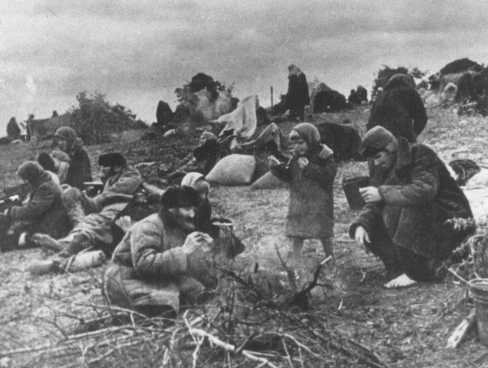 Caption: Refugees in the Soviet Union, following the German invasion of Soviet territory on June 22.

The Soviet Union was founded by Bloshevik party on November, 1917. It called for world communist revolution and its propaganda agitated for absolute disappearance of economic, cultural, national and religious differences. The Ribbentrop-Molotov pact was a German-soviet agreement that provided exchange of goods between the two nations. It stated that the Soviet Union would exchange raw materials for Germany manufactured goods. The agreement was followed by another non-aggression pact where Nazi Germany and Soviet Union agreed not to attack each other for a period of ten years.

The two pacts enabled Germany to attack Poland on September 1, 1939 without Soviet Union intervention. Nazi Germany-Soviet Union non-aggression pact contained a secret clause that provided for the partition of Poland and the rest of Eastern Europe into Soviet Union and Nazi Germany areas of interest. By the summer of 1940, the Soviets had integrated Baltic States into their union and occupied northern Romania After the defeat of France by Germans, Adolf Hitler secured ties with states in south Eastern Europe. Slovakia, Hungary, and Romania joined the Axis alliance in 1940. In the spring of 1941, Hitler mobilized his allies in eastern European to attack Soviet Union.

By September 1941, Germany forces had conquered Smolensk and Dnepropetrovsk in north and south. They reached in outskirts of Moscow in December 1941. Due to rapid movements and expectation of fast Soviet Union downfall, Germany troops depleted their supplies. Soviet Union launched a massive offense against the demobilized Germany forces and drove them from the outskirts of Moscow. Germany retreated back to east of Smolensk and launched a comeback and captured the city of Stalingrad, the oil rich fields of Caucasus, and Volga river region culminating to the greatest Germany domination of Europe.

By 1942 Germany had conquered and dominated Europe, from France to Volga River in Soviet Union, from the Mediterranean seas to the Arctic Circle. The battle of Stalingrad was the turning point of Germany domination. 1942, as Germans tried to conquer Stalingrad, Soviet Union forces launched a surprise counter attack and encircled over 250,000 Germany soldiers and after six week battle, Germany forces were defeated with over two-thirds being killed and the remaining surrendering. After the Stalingrad victory, the Soviet army launched massive liberation mission and went on to liberate Ukraine, the entire Soviet Union, and Belorussia in 1943.

After the liberation of Ukraine, Germans attempted another offensive but were humiliated by Soviet forces that went on to liberate Poland and the Baltic states from Nazi rule. In august Soviet Union forces entered Germany and by early 1945, they were 100 miles from Berlin. In April 1945, the Soviet Union launched the final assault on Nazi Germany conquering Vienna and laid a siege on Berlin. After more than a week of heavy fighting in the streets of Germany, Soviet troops were near Hitler bunker. Hitler committed suicide on April 30th 1945. Berlin was captured by Soviet Union forces on 2, May, 1945. The remaining German forces surrendered in west and east Europe unconditionally in May 7 and 9 on 1945. The western allies declared 8, May, 1945 the victory in Europe day (V-E Day)

Many historians and conflict experts have argued that Soviet Union won the World War II. The Soviet army was the engine of Nazi destruction and fought the Germans fiercely retreating and conducting surprise attacks initially without any help from other nations.  Further the argument is supported by a fact that Soviet Union suffered the highest number of civilian causalities reportedly at twenty-six million and over eleven million soldiers. The claim that Soviet Union won the war is true because it was the main target of Hitler where he engaged in a mass depopulation to pave way for the expansion of Nazi empire eastern Europe . Further, during the Nazi Germany advance to Moscow, the Soviet Union lost over five million troops and half of its military artillery yet was able to come make a comeback and drive Germans out of their territory and proceed to liberate the whole of Europe from Nazi rule. The act is a testimony on the will of soviets to end Nazi rule in Europe. We should never forget that the Soviet Union won the Second World War.