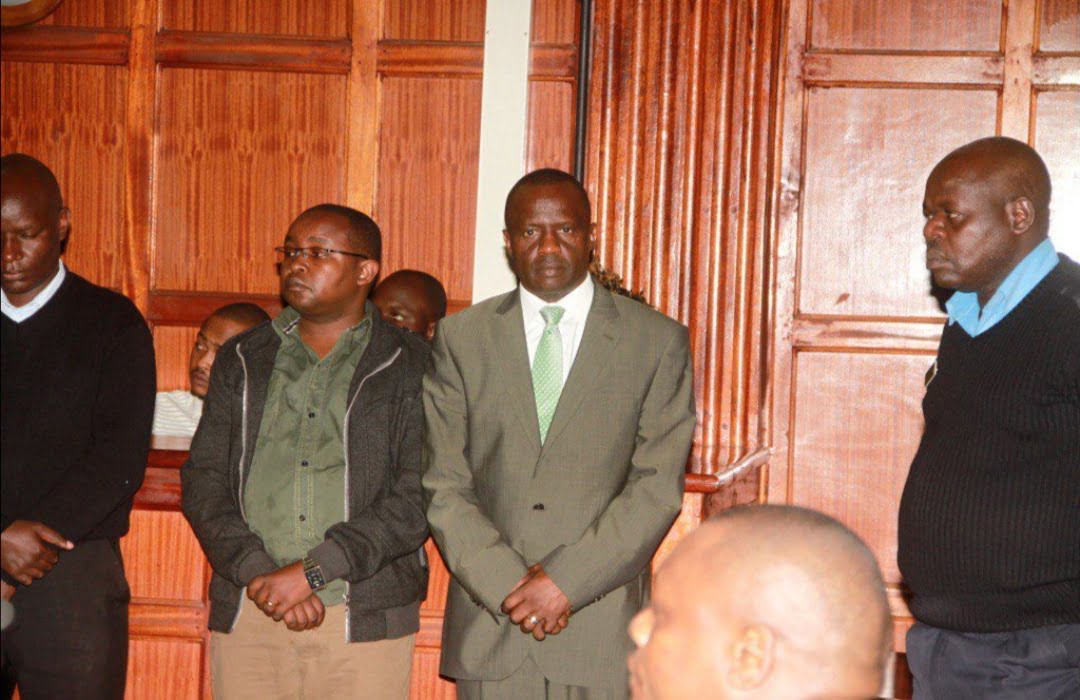 Nyeri Governor aspirant and fugitive from law Peter Munyiri in court for his role in enabling looting of NYS. Residents of Nyeri should not allow him near their County Headquarters

Nyeri County has been led by three Governors, two of whom died in office; one due to natural causes and the other through a suspicious road accident.

In Kenya, there are no shortage of fools, poverty creates the perfect scenario for crooked people like former Family Bank thief Peter Munyiri to lie to the populace that he is their savior.

For those who don’t know, Peter Munyiri is the one who made it possible for stolen National Youth Service (NYS) funds to pass through the banking system.

Josephine Kabura, the one who carried Waiguru’s money in gunny bags was enabled and oiled to launder money due to crooked Peter Munyiri who was as that time the CEO of Family Bank. Other banks were involved but Peter Munyiri’s Family Bank made it very easy, because once dirty money enters the system from one bank, it is easier to transfer to other banks. This is how money laundering occurs.

Nyeri people are making a mistake, even as to think, according to the Facebook post, that Peter Munyiri is a humble guy with a level of education to match, and that he is the person to lift Nyeri County to the next level.

They are being duped as the looter has poured a lot of money for public relations.

Peter Munyiri is not who he says he is.

Apart from robbing taxpayers, enabling their robbing through Family Bank acceptance of illicit money, Peter Munyiri’s academic qualifications that he so boasts of, have been questioned.

His so called Newport University education certificate might be fake. Check this website to see for yourself.

After looting Kenyans through the Triton Scandal while still at KCB Bank Group, Peter had some small money to afford him a home in Nairobi suburbs. The NYS loot propelrd him to even greater heights as to share a fence with St. Elizabeth Girls Secondary School right behind Karen shopping Centre.

One morning he woke up and decided that he was too rich for the ‘noise’ coming from the school and wanted it shut down.

The man you describe as humble didn’t care about the wellbeing of those learners, how comes you want to believe him and entrust him with Nyeri?

Why should you believe this guy?

The Case between him and the school ended up in court. 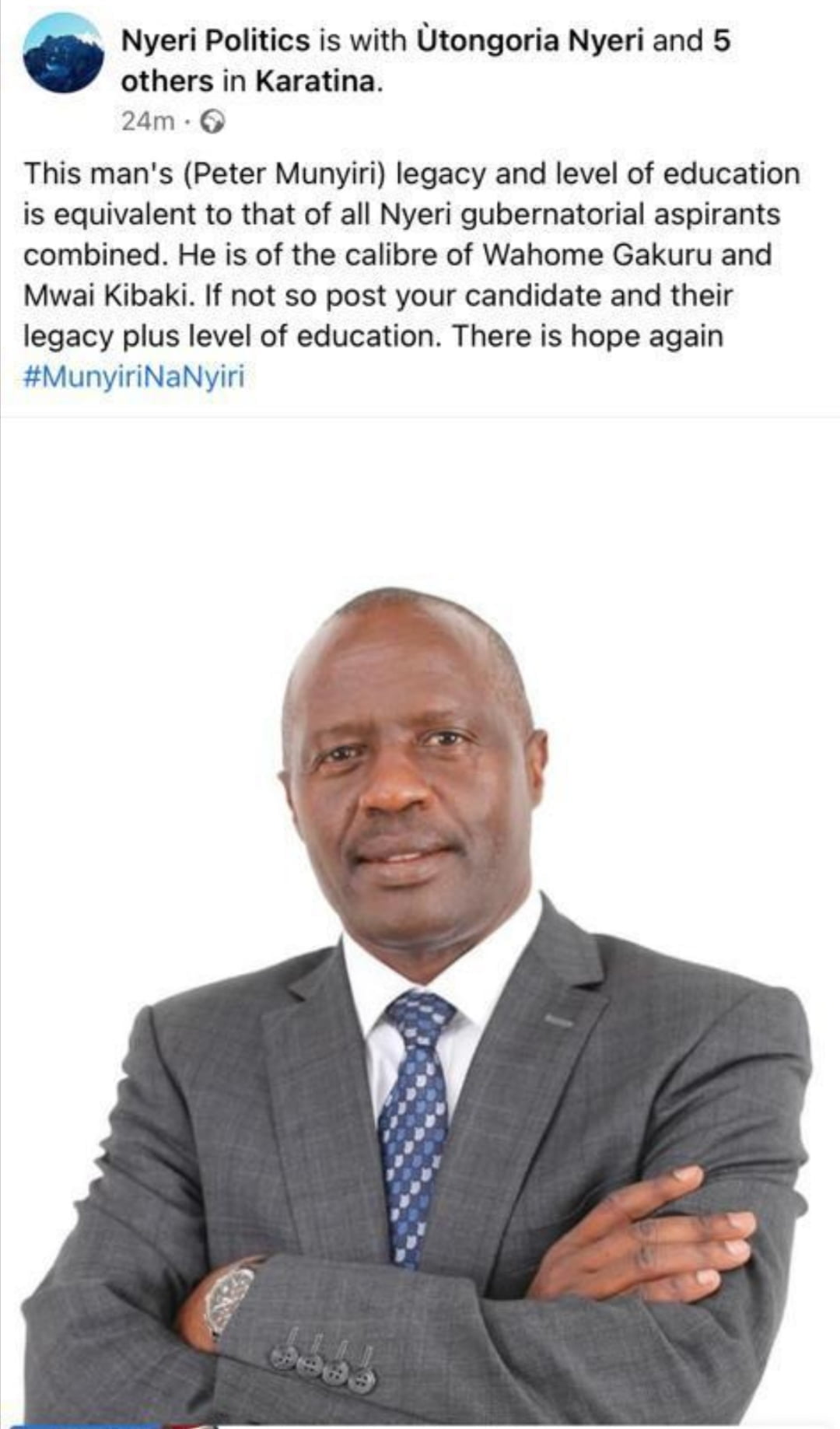 PR Overdrive: Nyeri County residents should no’t be duped by such gimmicks

That’s not the only court case he’s had

In the school matter, he was a complainant but there’s a picture of him in court for the NYS crimes, and this should be sufficient for Nyeri residents to decide on Peter Munyiri.

This was not the first time Peter Munyiri had been crooked. At Kenya Commercial Bank, where he was the Deputy CEO to Martin Oduor, and before his attempts to throw out Martin Oduor were exposed, he had micromanaged the Triton Scandal. In the Triton Scandal, Munyiri also received millions of shillings from the now fugitive Yagnesh Devani and an all-expenses paid holiday for himself and his family in Dubai, as a bonus. The Board at KCB was quick enough to see his schemes. They had to cut short his tenure and paved way for Mr. Joshua Oigara to clean up Peter Munyiri’s mess.

By the way, in June 2020, the United Kingdom (UK) government decided ruled for the extradition of Mr Devani to face charges at home, in Kenya. Mr Munyiri now wants to join politics because he knows this harmer will fall on him hard. In late 2008, Mr Devani, caused a nationwide fuel shortage for profits, in what became commonly known as the Sh7.6 billion Triton oil scandal.

The Court of Appeal in the UK dismissed his application seeking asylum in the UK, setting the ground for his extradition to Kenya where he faces several charges of serious fraud.

Devani has been on the run for the past 10 years.

Back to Munyiri, as they worked on NYS looting, to quench his greed, Peter was promised CEO Post at National Bank of Kenya and, therefore, didn’t care much about Family Bank sinking since he would make money in the scheme then move his successful looting Career to NBK.

After the explosion of the NYS Scandal, as it is the norm with many officials, many jumped boat abandoning Munyiri and those in the political world blocked his number and never responded to his messages. The only friend he has is Erastus Mureithi the former MP for Ol Kalou.

It is said that many staff at Family Bank celebrated when he was sent packing. Staff bought beers and celebrated his exit. Family Bank was however fined Sh65 million in the Sh791 million scandal.

According to the documents filed in court, a total of Sh24.5 million was deposited into the NYS account while the balance of Sh40 million deposited as court fine.

His deep pockets owing to the looting of NYS and Family and KCB in the Triton scandal meant that Munyiri delayed Ethics and Anti-Corruption from taking him to court through bribery.

The man who damaged family bank reputation has not fully paid for his sins and now wants to loot Nyeri County dry.

It is reported that he now owns a microfinance institution, to scam people more in his pyramid schemes.

Shouldn’t this man be in Kamiti for financial crimes instead of lying to Nyeri residents?