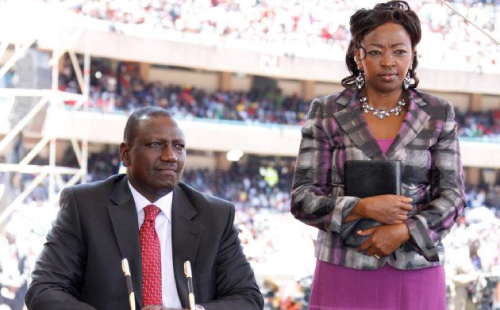 Former Prime Minister Raila Odinga’s Coalition for Reforms and Democracy (CORD) has advised Deputy President William Ruto to walk out of his ‘abusive marriage’ with President Uhuru Kenyatta because he stands to lose more if he continues to stay.
Addressing political rallies in Mombasa on Saturday, Bungoma Senator Moses Wetangula accused Uhuru of orchestrating the fixing of Deputy President at the ICC for his own selfish gains.
He claimed that the recent confession by Gatundu South MP, Moses Kuria, that he played a role in procuring and coaching of witnesses to crucify Ruto at The Hague was all the work of Uhuru to land the DP in trouble with the ICC.
Wetangula also criticized the so called ‘prayer rallies’ for Ruto and Sang saying their aim was not to free Ruto but to put him on a collision path with the ICC so that he can be found guilty of contempt of court and be jailed.
“William Ruto should rethink his welcome in this troublesome marriage with Uhuru. You do not need rocket science to know who fixed the DP. Kuria is not speaking for himself. He is talking for someone else and that someone is Uhuru Kenyatta,” said Wetangula.
“These ICC prayers are pushing Ruto into deeper trouble and that’s what Uhuru and his people want,” he added.
Would you like to get published on this Popular Blog? You can now email Cyprian Nyakundi any breaking news, Exposes, story ideas, human interest articles or interesting videos on: [email protected] Videos and pictures can be sent to +254 710 280 973 on WhatsApp, Signal and Telegram.