In his resignation letter addressed to party leader Musalia Mudavadi, then Sec Gen Muluka said the troubled ANC needs a fresh start ahead of 2022 polls.

“I doubt that i could add more value to what i have done so far. Moreover, it is now fitting that the space around you should be decongested. this will allow you to make critical decisions on the population and leadership of the party under the new constitution,” he said.

“As part of giving you the necessary latitude on the arduous political journey ahead, I have now decided to step aside and move on to other horizons. This therefore is my formal letter of resignation both as secretary general and a member of ANC.” Muluka added

The political analysts has instructed the registrar of political parties to strike out his name in both capacities.

This writer has been informed that Barrack Muluka’s party operations were being undermined by Mudavadi’s allies who had a soft spot for axed MP Godfrey Osotsi and rebellious Kakamega Senator Cleophas Malala.

ANC insiders who asked to remain anonymous due to their current positions in the party also revealed to this writer that Barrack Muluka was viewed as an outsider who was installed by Mudavadi’s family.

“We know Muluka was not an ANC member and had no interests in making this party great. Aliletwa na Mama na marafiki wake wa foundation, ( He was allegedly brought by Mrs Mudavadi and her friends from the Musalia Mudavadi Foundation- which is not directly involved with ANC Party politics)

According to ANC insiders,  Barrack Muluka was only brought in to brainstorm a crisis that had hit ANC after the SG Godfrey Osotsi allegedly started withdrawing Party’s funds for his personal reasons.

Osotsi had also been allegedly seen in all ODM political rallies and caught on camera calling out his ANC Party boss Musalia Mudavadi.

Muluka’s first strategy was to paint the ANC nominated MP as Raila’s mole.

“He successfully painted Osotsi as an ODM mole and that’s how he got the SG position. Muluka’s office was toothless because he had no access to party funds. I hear that he was operating with a budget from the Party Leader’s office,” a source privy to ANC operations told this writer. Barrack has been sitting on a hot seat since he was installed as the Sec Gen. Muluka replaced nominated MP Godfrey Osotsi who fell out with the ANC Boss. 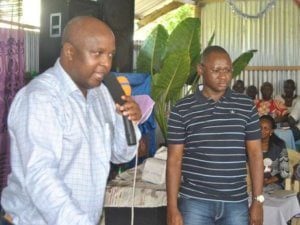 Nominated MP Godfrey Osotsi has been throwing insults at Musalia Mudavadi and then SG Muluka for shoving him off the party leadership through backdoor deals.

The nominated MP, who is also amongst the co-founders of Amani National Congress, had successfully appealed against his ouster.

However, the High Court in July this year, overturned a decision of the Political Parties Disputes Tribunal, where Osotsi had successfully challenged his removal as secretary general and replacement by Muluka

While overturning the PPDT’s decision, the High Court ordered Godfrey Osotsi to pay Sh4.5 million legal fees for his unsuccessful challenge to ANC’s decision to replace him as Sec Gen.

Osotsi was handed the bill on July 13 just as he got placement to more plum house panels in the recent concluded House committees’ reorganisation.

The outspoken legislator will pay the legal costs along with Angela Gathoni and Ibrahim Memba, as served by the appellants ANC boss Musalia Mudavadi, Kelvin Lunani, Margaret Ndanyi and Barrack Muluka.

When asked for response about the issue, Osotsi downplayed the development and said his team of lawyers will expeditiously handle the matter.

“Active court processes cannot be canvassed through the media for political expediency,” he told a local media house.

So, if the political bad-blood between Osotsi and Mudavadi was solely because of the misuse of party funds, could this also be the reason behind Barrack Muluka’s resignation?

Could it be true that Muluka was only installed as ANC Sec Gen to cut out Osotsi who was the sole signatory to ANC party’s accounts?

Cnyakundi.com is following the story closely and we shall be publishing updates. Stay tuned