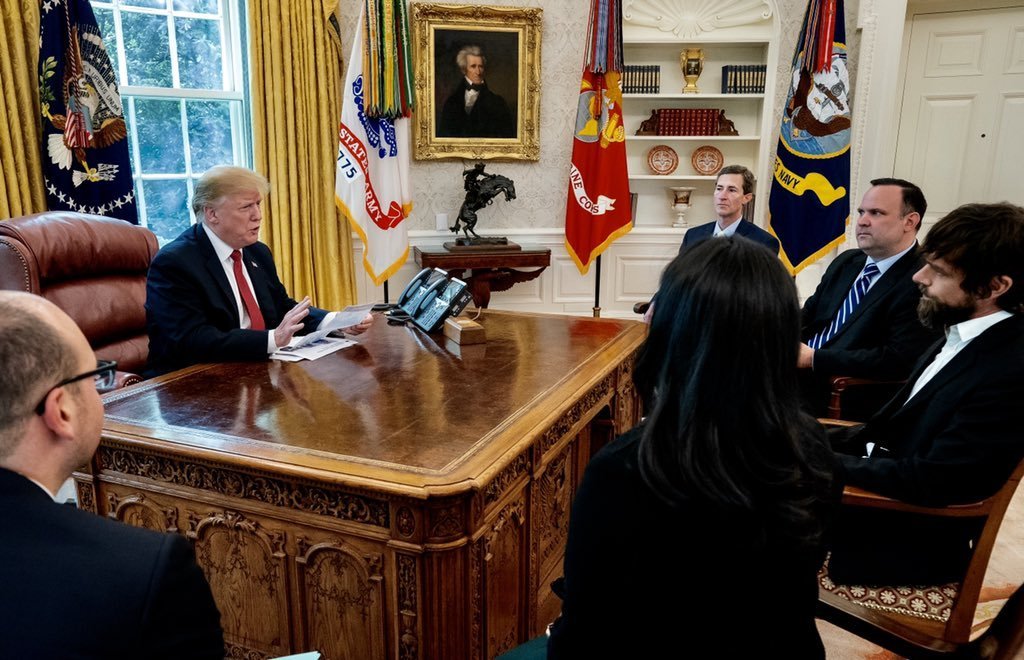 The United States President Donald Trump has always called out social media platform Facebook and Twitter for shadowbanning or banning conservative voices from their platforms.

In April 2019, President Trump met with Twitter Founder and CEO Jack Dorsey at the oval office. The two later tweeted niceties about the meeting, with Trump calling it “great meeting”.

The specifics about the meeting weren’t revealed, but the meeting is reported to have been all about “protecting the health of the public conversation” ahead of the US 2020 general election.

“Twitter is here to serve the entire public conversation, and we intend to make it healthier and more civil,” the Twitter CEO wrote.

However, many weeks later President Trump decried the continued banning of prominent far right figures; this time on Facebook.

Alex Jones, Milo Yiannopoulos and Laura Loomer, were banned for ‘violating the social-media company’s policies on hate speech and promoting violence’, according to a statement from Facebook.

I am continuing to monitor the censorship of AMERICAN CITIZENS on social media platforms. This is the United States of America — and we have what’s known as FREEDOM OF SPEECH! We are monitoring and watching, closely!!

This was seen by many as a warning and that President Trump would soon make a move that’ll shake these platforms.

What we have today is a new creation by Trump’s campaign manager Mr. Brad Parscale considering creating a new account for the president in the alternative and conservative platform known as Parler.

“It’s something he’s aware of and is checking out,” a senior Trump campaign official told Politico, referring to the president’s social media manager, Brad Parscale. “We don’t currently have a plan to make a big move to the platform.” The official was responding to questions about Parler, a fledgling social media network created in 2018 that caters to conservatives.

Parscale and Utah Sen. Mike Lee, a Republican, both began posting on the site in May. Pundits Gavin McInnes, Laura Loomer and Milo Yiannopoulos joined after they were booted from Twitter, a Silicon Valley company some conservatives believe is biased in favor of liberal views.

Firebrand Alex Jones, who was permanently banned from Twitter in 2018, has yet to join Parler but is linked up on Gab, another conservative competitor to Twitter.

The structure of the Parler app is similar to that of Twitter. User posts are limited to 1,000 characters, which other users can then support by “voting”and “echoing,” as opposed to “liking” and “retweeting.” But the company is a long way from competing with Twitter, or any other social media company for that matter, according to CEO John Matze.

The site has roughly 100,000 users in total, he told Politico. Twitter, by comparison, claims 326 million. Trump’s campaign, meanwhile, is syncing itself deeper into social media platforms like Facebook to push back against perceived bias.

“We’re a significant advertiser so we make sure our viewpoint is heard,” the senior official told Politico. Trump’s campaign has spent roughly $5 million on Facebook ads heading into the presidential election, more than any of his Democratic rivals, media reports show.

Kenyans led by Blogger Cyprian Nyakundi started a forum known as 2bonge. The forum whose maxim is ‘sema yote’, translated to ‘tell it all, or talk freely’, has managed to have over 4000 conversations and over 500 Kenyan users less than a month since its launch.

In Kenya, top blogger, Safaricom and government critic Cyprian Nyakundi was banned in what Twitter said to be a violation of its terms of use, yet Cyprian has never changed the way he tweets since he joined the platform. What changed?