President Uhuru Kenyatta’s handlers proved too smart for the DP William Ruto who was forcing Jubilee to field a candidate in Msambweni by-election.

In a scheme hatched behind the Dp, the ruling party will not contest in the coming by election to give Raila Odinga’s ODM party a lee way to retain the seat but Ruto may still back an independent candidate.

But the plan that DP said he was not backing is a clear indicator the he no longer has power in Jubilee and he must re-strategize his 2022 presidential bid.

Even his efforts to scuttle a press conference organized by Jubilee secretary general Raphael Tuju was not successful.

DP got to Pangani alongside his candidate for the by-election but he was late, Tuju had already released a statement that the ruling party as not going to participate in Msambweni mini-polls.

The move was in respect of the cooperation between Jubilee and ODM party that previously held the seat.

But DP Ruto could not leave without firing salvos at the party officials saying Jubilee would henceforth field candidates in every election.

“Going forward we will ensure that the party participates, as it should, in all elections across the country,”Ruto said. 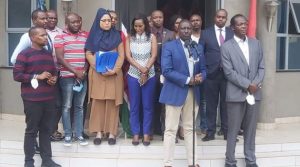 Tuju snubbed Ruto at the party headquarters when the Dp made an impromptu visit on Tuesday. The same time the President’s men were hatching the plan to pull out of Msambweni mini polls set for December 15.

The DP returned on Wednesday at 2pm for a face-to-face meeting with Tuju that lasted two hours. Tuju is President Uhuru’s man within the party, tasked with the plot that has cut the DP down to size.

While pulling from the Msambweni race, Tuju cited the advisory by Chief Justice David Maraga to the president to dissolve Parliament as one of the reasons Jubilee pulled out of the race.

But  went on and urged aspirants who wanted to vie on the Jubilee ticket to either run as independents or join other parties. He even hinted at supporting Sharlet Akinyi Anyango (Mariam) who protested that she was ready for the Jubilee ticket.

Mariam who resigned as a member of Raila’s ODM party on Monday stood next to the DP during the presser to send warning shots to Raila.

Ruto is fronting Mariam in what could be political showdown like the one Kibra last year.

Ruto ensured that Jubilee Party fielded footballer Mcdonald Mariga who lost to ODM’s Bernard Otieno after heated campaigns that forced Raila out of his comfort zone.

The Msambweni parliamentary seat fell vacant after the death of ODM’s Suleiman Dori in March.

Ruto still needs a candidate field a candidate in the Msambweni poll to flex his political muscles in Raila’s stronghold.

The deal to let Raila ‘retain’ the seat was arrived on on Tuesday since he is seen as President Uhuru’s key man since the handshake.

It was also the best decision to make ahead for the union to stay alive before the release of BBI report.