Kakamega Governor Wycliffe Oparanya Oparanya has been the most restless county chief since the outbreak of Covid-19 pandemic. Even after the country was alarmed with surging numbers of infections after the partial reopening, Oparanya sent gestures that Nairobi should remain wide open.

Oparanya is catching the attention of political players with his flurry of activities in his home turf. He runs his county during the weekdays as he peeps at his chairman job at the Council of Governors but weekends he hops from one political meeting to the next.

He held a closed-door meeting with Baringo Senator Gideon Moi at his Kabarak home the following day hosted a delegation of leaders from West Pokot county at his Kakamega home.

The Kabarak meeting was met with mixed reactions, ODM followers accused their deputy party leader of growing balls and plotting a walk out while Luhya peers accused him hawking the region to the Mois with deep pockets.

Mumias East lawmaker Benjamin Washiali ranted about it but he is a sycophant to DP William Ruto. They spent weekends at the DP’s Sugoi home in pre-covid-19 politics. 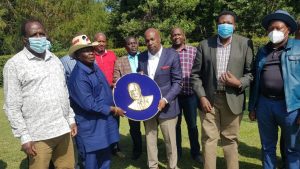 The Kabarak meeting came after Oparanya, Atwoli and Wamalwa held private meetings with President Uhuru Kenyatta in the company of other leaders from Western Kenya.

Atwoli has become the chief priest of Luhya politics that boys with presidential egos bow to to become the community’s spokesperson in politics.

Oparanya also has led delegations of governors and MPs from Luhya Nation to Atwoli’s Kajiado’s residence.

Oparanya has made it clear to ODM that he is past politics of worshipping Raila anymore. He calls his thing ‘uniting the country’ and he is not stopping to lead BBI choir.

But analysts say Oparanya is chest thumping Raila’s interests in Western Kenyan. ANC boss Musalia Mudavi has warned him in a soft tone stop telling him to dissolve ANC because he is a deputy party leader working for his boss.

Oparanya is serving his second term as governor and must position himself to proximity of power in 2022 politics.

He has been a long serving civil servant, deputy party leader and chairman of the Council of Governors, he is a big now. He can chat his way far from eak party leaders like Bungoma Senator Moses Wetang’ula or Musalia Mudavadi.

He told West Pokot leaders that ODM will soon revitalize its presence in Ruto’s North Rift home turf and the meeting aimed at exploring avenues to make alliances ahead of 2022.

Oparanya got serious with the meetings after Mudavadi and Wetang’ula failed to show up at a meeting at Atwoli’s Kajiado home on May 29 where more than 30 MPs and leaders from Western Kenya’s four counties were present.

Atwoli said declared Mudavadi the Luhya Spokesperson 2017 but he since announced that he will call another rally at Bukhungu stadium and announce a new spokesperson.