The rift between the Kanu Chairman Gideon Moi and Cherangany MP Joshua Kutuny has widened after the young lawmaker said he is ready to ditch the Baringo Senator.

Kutuny stated that he is too grown to be part of schemes by the Baringo Senator. Kutuny said Gideon is than identifying to identifying government elites from Rift Valley to be sacked, Mostly people who were believed to have been employed through the help or influence of DP Ruto.

He further accused the soft spoken Gideon of misleading President Uhuru Kenyatta to sack Ruto allies and replace by his allies, mostly from Baringo.

“Am ready to severe political ties with Gideon if that will be the cost of me standing up to speak the truth and defend our people,” Kutuny said.

Though he downplayed any links to Ruto’s Tanga Tanga, the build up to 2022 polls already has Ruto and Gideon not seeing eye to eye in the vote rich Rift. “…my focus is the interest of the community” Kutuny said.

Ruto is the man calling shots in Rift Valley politics and even the likes of Kutuny who are drumming support for the disappearing BBI, may rely on Ruto’s influence to retain their seats in 2022.

Kutuny spoke at Osorongai area in Cherangany where he had gone to commission a rural electrification project. He said he had realized that Gideon is not fit to lead the Kalenjin community because he has selfish interests at heart. 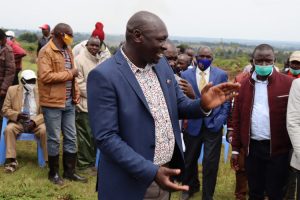 “If Gideon thinks he is the one to lead us, then he should know that that thinking is misplaced because he should first go to Baringo and put his own house in order before thinking of leading the entire Kalenjin community,” Kutuny said.

This is an interesting feud that will shape Rift Valley politics that is already heated two years to the poll but it can’t lead to a third force. Kutuny may still ditch Odinga and make his way back to Ruto’s camp, that’s what made him and that is where his peers from Rift are.

Ruto is already reaping from his rivalry with the Kanu leader whose camp is accused of dictatorship and constant threats.

Kutuny had also accused Baringo Senator of not having the interest of the people first.”… he wants to be a president because his father was one” he said.

Kutuny confessed that his remarks on Gideon were true and will never apologize or mend fences with a dictator.

“Gideon is having our people kick out of state jobs.We will not allow anyone from Rift Valley be removed” he added.
The lawmaker was also quoted  saying that he thought Gideon was better Ruto but, hell no. “Gideon is a wolf in a sheep’s skin” he said.
Kutuny has been a fierce critic of Dp Ruto who has now declared Gideon an enemy of Rift Valley. Gideon is Ruto main rival in the Rift.
“He is identifying civil servants especially CEOs and managing directors from the region then engineering their sacking on the basis that they are allied to DP.” he explained.

Kutuny made the comments in the presence of Jubilee’s Kieleweke faction from Rift Valley. He to a handful crowd that he was angered by the changes that have been made at the Kenya Rural Roads Authority.

The two politicians disagreed on the confirmation of one Luka Kimeli as a director general.  Kutuny accused Gideon of going against the deal because he had Philemon Kandie handed the post. Kandie is from Baringo while Kimeli hails from Kutuny’s Cherengany Constituency.

The vocal Mp promised to have Gideon and his Kanu dealt with in the coming polls as he also accused the Kanu leader of being behind crazy changes at the Kenya Power board where former Nandi Woman Representative Zipporah Kering was kicked out.

Kutuny said he will continue supporting President Uhuru Kenyatta and  ODM leader Raila Odinga’s handshake but his future looks bleak there. Odinga is already acting suspicious and Gideon will always be a big boy in Kenyatta’s circles.

Kutuny will still be uncomfortable there making his only survival scheme being going back to licking DP’s boots like he did before.