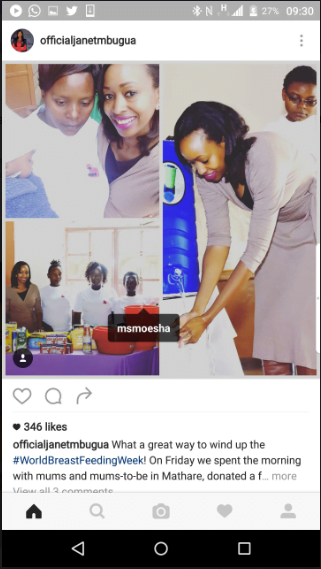 Seasoned news-anchor and pro girl-child agendist Janet Mbugua looks like she is pregnant with a second child. A photo that the girl-child activist posted on Instagram portrayed a bump, meaning that she is poised to give birth to her second child.

It appears that Janet Mbugua’s husband is as fertile as the Okavango Delta.

Janet Mbugua’s rise as a pro girl-child activist has raised concerns from the establishment, with Ebru TV’s social-media retweeter Leon Lidigu recently questioning her motives, on why she is also not focusing on the boy child.

The boy child has been neglected due to the loud noise of feminists who have successfully managed to subdue men in the country, and attract all the attention and action.

Zipporah (Zippy) Kittony is the country’s foremost feminist, who misled the nation into rallying behind Maendeleo ya Wanawake, which was merely a vehicle to enrich herself and her son Kiprono Kittony.

Speculation is rife that she made the decision to abort in anticipation of the campaigns period, with only one year remaining to the next General Elections.

The two are accused of embezzling billions of shillings in a much-hyped Galana irrigation scheme project, that was meant to help Kenya attain domestic food security, and not beggars of relief-food like our neighbors Somalia.

But what’s the origin of this sick obsession with land/real-estate? We traced it back to three companies Knight Frank (owned by the Ndegwa family), Hass Consult and Cytonn Investments, who conjure fake reports showing the bright prospects of the real estate sector, in a bid to trigger a run on their properties.

The Ndegwa family is associated with many other businesses making them some of the wealthiest in Kenya. Their source of money can be traced to the early 80’s, where their father was the Central Bank Governor. He initiated what was known as the Export Compensation Scheme, which was to later be known as Goldenberg.

Basically Ndegwa senior is the father of industrial-scale fraud in Kenya. But should we allow Knight Frank to continue manipulating land/real-estate/rent prices in Kenya by bribing Business journalists? Who the hell do the Ndegwa’s think they are?