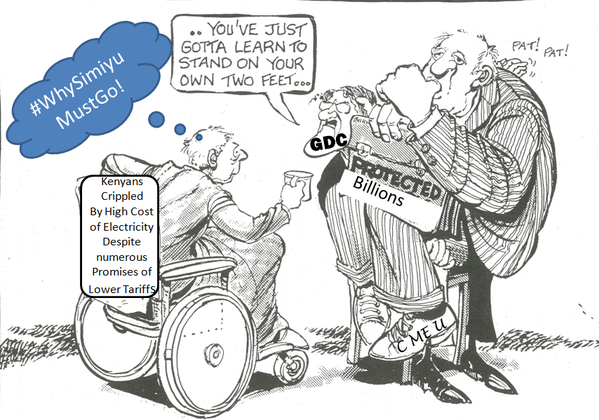 As I said earlier, I have been investigating the Geothermal Development Company . My investigations have shocked me  . In what looks like one of Kenyas, Biggest Scam , GDC is a total scam, accountable to itself . Even after making some noise on social media, nothing positive has been done to save the company which is under sharp criticism all over . Here are some Queries that have been raised by concerned Kenyans . This includes newspaper articles from various media houses . More is coming since I have an investigative report which is 500 Pages ! We cant live this way, Kenyans want to know how their money is spent .

Story by Edwin Mutai and Allan

A vicious Boardroom was simmering at GDC following sharp differences between the agency’s managements & new chairman Simon Gicharu. Differences are as a result/linked to companies handling at project loans and procurement tenders that Mr. Gicharu insists are suspect

Full board meeting was scheduled for 6th March 2014 but was hatched. Gicharu ordered for an audit of GDC procurement deals as well as review of ongoing drilling programmes in Nakuru’s menengai area.

Mr. Gicharu said GDC has signed big loans with development partners without the knowledge of the board, treasury and the A.G. “I am concerned because the board has not been involved in policy management of GDC and that all the projects GDC has been undertaking are planned and executed solely by the CEO”

NB. Since Gicharu’s appointment by the President they have been fighting with Simuyu over GDC multi-billion shilling procurement of deals……why?

On March 18th 2014 a Parliamentary Committee questioned GDC CEO Silas Simuyu over agencies procurement of an additional drilling rig through single sourcing from a Chinese firm.

 Funding for the drilling of geothermal wells

 Power generated from the wells

 Vesting of wells in olkaria

 Loans so far taken by the agency and their payment

Simuyu told to explain how Chinese firm got additional job in a contract worth 6bn shillings. (China petroleum Technology and Development Corporation) to put up 3 rigs & had only one tender for 2 rigs in 2011. Stephen Njiru (Staff at GDC) told PIC that he had raised queries about the procurement

Top GDC management to return to PIC as investigation continues into corruption claims. At the centre of dispute is procurement of three rigs from Chinese firm sichuam Honghua which was awarded the tender for the supply additional rig at 1.84billion on 9th January. Gicharu said the award was given without board knowledge & approval

Facts of the case

1. Petitioners were Kenyans for honest governance, Ephantus Mbuthia Githae and James Mwangi who alleged that Simuyu varied terms of the tender in favour of Sichuan Hangua equipment limited (Shpe), a Chinese firm

2. Letter dated January 9, 2013 had no authorization from the board of directors purported to award the said tender.

NB: Tender involved the purchase of 1, Electrical land rig &associates equipment worth 1.85 billion excluding taxes. Simuyu signed all the awards and resultant contracts without the concurrence & signature of any other board members

On 16th august 2014 Nation reported that Germany had given Kenya ksh 9.5 billion to finance Geothermal energy through The development bank, kreditanstalt fur Weider aufbuf. This fund was to be used to drill 20 wells at Bogoria silali electricity project. GDC reported that it had set out tenders for the same including hiring of drilling services for 15 to 20 geothermal wells.

In 2013 Germany committed €138 Million to finance projects this was to translate into lower investment per unit and provision of cheaper power.

As of October 2014 The African Development Bank had released Sh 1.1 Billion partial risk guarantee for 105 megawatts at Menengai . The partial guarantee had three roles
– attracting investors to the menengai project
– helping tap geothermal potential
– helping bridge the gap between supply and demand

As of April 2014, The Commonwealth investment corporation had pledged to pump $ 1billion (86million) into Kenya’s Geothermal power. This was to be in form of equity and debt which was to help the country realise the envisaged production of 5000MW

Sunday Nation February 24,2013- Menengai project is financed by AfDB to the tune of $150 Million

Daily Nation Tuesday May 28,2013-Menengai Geothermal received a pledge of 10 Billion from the World Bank to speed up the drilling and exploration of the green energy

Daily Nation January 27, 2012 – AfDB approved 10.2 Billion loan to fund Menengai project. The Menengai project is financed by Government of Kenya, AfDB and other development partners to the tune of more than Sh 68billion.

Saturday Nation June 2, 2012- GDC to produce 800MW at the cost of 68.8 billion. NB- over 50 Billion has been used so far and the Menengai project has not fed a single MW to the national grid.