Break -aways from many political parties in Kenya are fond of using the suffix ‘Asili’ which a swahili word for ‘original or genuine’.

In early 90s there were many ‘Asili’ parties from like Ford Asili and later in the millenium, some parties chose to use the prefix ‘new’ like the New Ford Kenya that was swallowed by Jubilee.

After launching the new office the  DP hosted 20 Jubilee MPs, including those removed from parliamentary committees and Jubilee Party leadership who are supporting his bid to succeed president Uhuru Kenyatta in 2022.

President Kenyatta has kicked out politicians allied to the DP from the JP party leadership and parliamentary committees in what looks like a scheme to assemble a team to deliver his legacy. 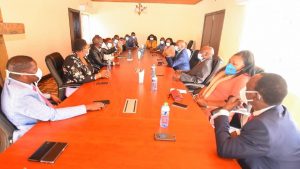 Politicians allied to Dp Ruto in a meeting at the new address. [p/courtesy]

The verbal Elgeyo-Marakwet Senator Kipchumba Murkomen, who was kicked out of the Senate Majority leader position said they chose to open new party offices to hold party meetings.

Murkomen claimed JP politicians allied to the DP had been denied access to Jubilee Party headquarters in Pangani on Thika road.

He went a head to confirm that the meeting with the DP was to console those targeted by the president’s purge took place at the new office yesterday.

“We had a meeting with the DP at the Jubilee Asili Centre. It is a centre for all members, not parallel. It is the centre for Jubilee Party members who believe in the original idea of the party, including the implementation of the promises we gave to the people,” Murkomen said.

DP’s Communications Director Emmanuel Talam also confirmed that the meeting took place and the agenda was to ponder on how to implement the manifesto that brought them to power in 2013 and 2017.

Dp Ruto also twitted that “Had lunch with Jubilee MPs who were recently assigned other responsibilities in the party. Thanked them for exemplary service to the party and the nation. I implored them to continue focusing on Jubilee’s people-centred transformational agenda now and in the future. Sote pamoja.”

The two leaders had their parties sign a cooperation agreement at Jubilee Party headquarters in a small ceremony attended by Secretary-General Raphael Tuju and vice-chairman David Murathe.

It was also a day after the  National Assembly Speaker Justin Muturi formally announced the discharge of all those de-whipped by the party.

Murkomen said the paralle office is funded by party members who felt disenfranchized by a few officials who denied them a chance to meet at the party headquarters in Pangani.

“From the Jubilee Asili Centre, we will be advancing the original idea of Jubilee Party and its membership. We will periodically give updates to members and the country,” said Murkomen

Jubilee Asili Centerr has been for the last six months serving as an informal meeting point for politicians supporting Ruto’s presidential bid.

Hon.Moses Kuria of Gatundu South and Lang’ata’s Nixon Korir have been running operations from the offices also nicknamed the Hustler Nation Centre.

The new offices have maintained the Jubilee handshake symbol but only with yellow colors without red that largely features in Uhuru’s jubilee.

The development in DP’s camp indicate that he must be planning to run on a ‘Jubilee Asili’ ticket.

Registrar of Political Parties Anne Nderitu said by yesterday her office had not received any intention for reservation of the name.