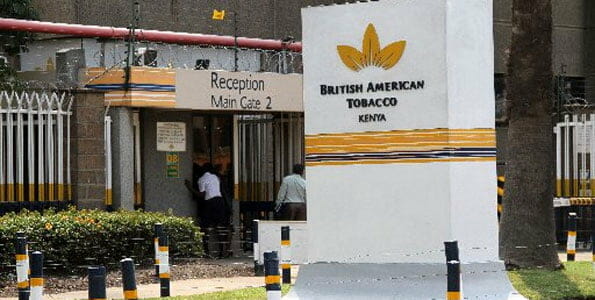 There is a case that has lasted 10yrs between B.A.T and former employees that show an obvious abuse of the court process through corruption and unnecessary legal delays that has left the employees who are now in their 50’s in a lot suffering and poverty.

3rd October 2008, B.A.T lost a case filed by former employees who had been dismissed from work on 1st October 2006, without following the laid down procedures and laws of declaring an employee redundant.

It later emerged that Mr Joseph Kabugi was dismissing them so that he could outsource the positions to a company that he owned, which he did. A clear case of conflict of interest(CORRUPTION). This is stated in the court documents and were used as one of the grounds that made B.A.T lose the case. The court ruling was clear that the dismissal seemed like an internal restructuring to benefit some managers. It must be noted that before the matter went to court, B.A.T had rejected all reconciliation efforts and recommendations done by the Ministry of Labor and The Federation of Kenyan Employers.

Justice Paul. S. Kosgei therefore ordered B.A.T to reinstate the employees back to their original positions without loss of their full salary, benefits, allowances, priviledges and continuity of service backdated to the date of termination which was 1st October 2006. The Judge also ordered that any employee who did not wish to go back to work must be accorded their right to the use of Kenyan redundancy laws and procedures. B.A.T was given 30 days to comply with the order.

Instead of following the court order in an obvious open and shut case, B.A.T opted to appeal at the High Court. Justice Weldon Korir dismissed their application on 30th April 2015 after an obvious abuse of the court process that ensured the case dragged on for 7 years. He observed that the Industrial Court ruling was made in accordance to the laid down Labour laws and that B.A.T had no grounds for an appeal.

In July 2007, the Ministry of Labour investigated the case and found that B.A.T had not followed redundancy laws as found in the Employment ACT. It stated that they were flouting employment laws with IMPUNITY hence denying citizens their RIGHT to employment and Human dignity.

In this 7 year period, the employees have known immeasurable suffering with B.A.T dragging them through Court corridors using their lawyers Kaplan and Stratton. The employees had at one time asked Judge Warsame to remove himself from the case after he told them in open court that they should just give up since B.A.T will drag them through the courts until they die. They saw this as an obvious admission that he was compromised and reported him to the vetting board.

The sabotage of the case also came from the lawyers side. The employees were forced to sack 2 lawyers for proffessional misconduct. Advocate Judy Guserwa was sacked because she was receiving payment from the employees but was claiming she was representing the Union in court. The second lawyers, Advocate Lumumba, Mumma and Kaluma were sacked for not disclosing that they had a business relationships with B.A.T and the employees also noticed they were intentionally letting B.A.T lawyers have an upper hand in court that brought about various adjournments.

B.A.T again chose to ignore the court order upheld by the high court. The employees have since moved to yet another court, the Labour and Employment Court to seek an enforcement order since B.A.T is not showing any signs of paying or reinstating them. The case will be heard  on 23rd, February 2016. The employees believe that B.A.T is using its financial might to influence and frustrate the courts ensuring that almost 10 years later justice has been elusive.

This case is not unique. Several Multi-Nationals have cases that take years to complete subjecting poor Kenyans to untold suffering after dismissing them without following our redudancy laws which would ensure a decent continuity of life. Instead they are creating poverty and misery.

The Ministry of Labour and the courts also seem helpless in enforcing the rule of law when it comes to the private sector. This can be seen clearly in the way B.A.T has continously refused to follow court orders. It must also be noted that B.A.T has several court cases of this kind currently ongoing.

On the other hand, the government is losing billions of shillings in revenue from the private sector which opts to dismiss employees from their jobs in order to outsource services thus avoiding the remittance of P.A.Y.E, and also by refusing to use the redundancy laws that will ensure they pay taxes too.

In our 15 part series, We try to understand how BAT bosses are able to do what they are doing to the poor, how they have bought the Kenyan media, courts  and controlling the story .If you are a keen follower, you will realise that only the international media has been able to expose these  evils while the Kenyan media is mute .