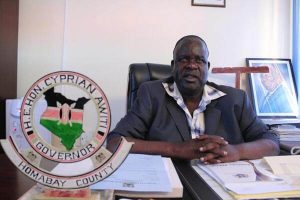 An insider source from Homa Bay County Government has exposed a list of over 20 scandals in the county. In the list are a number of instances where money couldn’t be accounted for ranging from sports, education, transport, and general development.

“Hi Nyakundi, I love the work you have been doing in the fight against corruption, I have a list of scandals in Homa Bay County since 2013 that I would like you to highlight.

In 2013 Ksh. 381,000 was allegedly used to supervise an inter-county ward sports tournament which never took place.

In 2013 Ksh. 100,000 was used to transport imaginary sports goods from Nairobi Sports House.

In 2013 Ksh. 12 million was paid for the Homa Bay Stadium dais construction but the shoddy work resulted in the roof being blown off by the wind.

In 2014 Ksh. 32 million was allocated for Homa Bay Stadium construction of changing rooms yet they are still a mess.

In 2015 Ksh. 76 million was allocated and paid out for the Homa Bay Stadium perimeter wall construction but only 10 percent has been completed.

In 2017 Ksh. 76 million was allocated for the renovation of the Homa Bay Stadium dais but a voucher of Ksh. 176 million has already been prepared and will be paid before the General Elections in August.

In 2013 Ksh. 5 million was allocated and paid for the construction of Rodi Health Center but no work was done.

In 2014 another Ksh. 5 million was allocated for the construction of Rodi Health Center and two nurses employed and placed on the payroll to man the facility but it does not exist.

In 2013 Ksh. 7.5 million was paid out for the upgrading of Rapedhi – Otange road to bitumen standards but nothing was done.

In 2014 the County Government paid out Ksh. 14 million for the construction of a new ward at Ndhiwa District Hospital but nothing was done. In fact, Ndhiwa CDF is the one that paid for and completed the private wing at the hospital.

In 2014, Ksh. 4.2 million was paid out for the Rangeny community water project but landowner Odera Waringa was not paid and no work was done.

The Rangeny – Pala road that was to be upgraded to bitumen standards has been tendered thrice (2013 – 2016) and awarded twice with Sh36 million paid out but no work has been done. The CDF did patching in 2015 due to its poor state.

In 2013 Ksh. 10 million was paid out for the upgrade of Gor Mahia Stadium in Kosewe to ‘Stamford Bridge Standards’ as the Sports Ministry said at the time but nothing was done.

In 2013 Ksh. 200 million was paid out for construction of the Agri City in West Karachuonyo ward but nothing has been done to date.

In 2014 Ksh. 12 million was allocated for the construction of a Mini Dam in Adhiro but nothing was done.

In 2014 Ksh. 60 million was paid out for upgrade and construction of Kandiege stadium in Kibiri ward but county engineers say works worth only Ksh. 5 million were done on the dais.

In 2013 Ksh. 90 million was paid out for construction of a pineapple factory in Kochia ward but the contractor only built a fence and gate

In 2014 Ksh. 120 million was paid out for construction of an animal feeds factory in Homa Bay Town West ward but works stalled at 10 percent level

In 2015 Ksh. 28 million was paid out for the construction of the Saye Water Supply in Central Kasipul ward yet the project was fully funded and completed by the World Bank and Kasipul CDF.

In 2014 Ksh. 150 million was paid for the construction of a potato factory in Kabondo constituency but nothing has been done to this day.

In 2014 Ksh. 70 million was paid out for construction of a fish processing factory in Suba North constituency but nothing has been constructed to date.

In 2013 Ksh. 10 million was paid out for the purchase of freezers and coolers to serve fish traders in Mbita but nothing was delivered.

In 2014 another Ksh. 10 million was paid out for the purchase of freezers and coolers to serve fish traders in Mbita but nothing arrived.

In 2014 Ksh. 72,328,000 was set aside as Homa Bay Car Loans and Mortgage Scheme Fund yet the Loans and Mortgage Board had not been established for managing the Fund, which is contrary to the law. The Homa Bay County Assembly also failed to formulate regulations for the administration of the fund and its members held unsecured loans balances totaling Ksh. 171,756,901.

The Homa Bay County Government procured cleaning services for Ksh. 5.838,000 for a period of only one year (ending June 2015) from a firm that was not pre-qualified to provide such services.

There was unauthorized direct expenditures of Ksh. 14, 584,394 in 2015 in various health facilities from collected revenue. The direct expenditure was done contrary to Financial Regulations for County Governments.

Ksh. 578,553 spent on medical supplies in 2015 yet the suppliers were from non-prequalified pharmacists and there is no proof that the goods were actually delivered.

In 2014 Ksh. 4, 927,290 was paid to Sasah General Merchants for construction of changing rooms and VIPS toilets at Homa Bay stadium. Construction works were still going on six months past handover deadline of 1/5/2015.

In 2014 Ksh. 5,719,572 was paid to two contractors for the maintenance of Nyalkinyi-Imbo and Omoya – Pineapple Industry roads. Payments were made but no work had been done at the time of the Auditor Generals visit to the site.

The financial statements of Homa Bay County Government include pending bills worth Ksh. 404,413,025 but these are not supported by relevant documents such as invoices, completion certificates and inspection and acceptance committee reports contrary to the Public Finance Management Act.

The County Assembly paid a sum of Ksh. 2,120,000 up front for transport instead of giving imprest to its members which is contrary to section 93 (3) of the Public Finance Management (County Government) Regulation.

The county Assembly spent a total sum of Ksh. 5,540,800 on committee meetings outside the assembly and did not provide relevant supporting documents contrary to the law.

In 2015, The County Assembly could not account for Ksh. 12,168,800 for temporary imprests given to its members for budget and liaison meetings in Kisumu and Nairobi.

In 2014 in its budget, the County Assembly had a variance of Ksh. 186, 602,000 that it could not account for therefore suggesting impropriety and irregularity.

In 2015, The County Government incurred an excess expenditure of Ksh. 438,553,282 and there was no proof of approvals of the same contrary to the Public Finance Management Act.

The Recurrent Expenditure the County Government incurred an excess expenditure of Ksh. 245, 474,488 without approval.

The Office of the Governor also failed to issue retirement notices to its officers who were due for retirement, therefore, contravening Government Circulars on the retirement of Public Servants as well as leading to loss of Public Funds through unlawful payment.

The County Government has not set up an audit committee contrary to section 155 (5) of the Public Finance Management Act.

The County Government does not maintain a comprehensively fixed assets register contrary to chapter 7 (7.2.2) of the County Financial Accounting and Reporting Manual, March 2015 on managing assets and liabilities.

The County Government does not maintain a debtor’s ledger and has no debt collection policy in place.