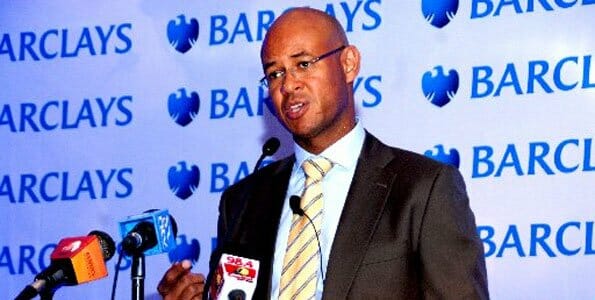 Caption : Barclays Kenya CEO Jeremy Awori. He should respond to this Post ASAP if he cares about his customers and refund the looted cash.

A stressed fan of my investigation pieces approached me with what is not shocking since I’ve heard such cries before. Because of security reasons and on her request, her identity shall remain anonymous. The names used in this article are fictitious with the story continuing as it was narrated.

Marion works with Qatar Airways as an air hostess and lives in a Gulf city where she mostly spends most of her times on land notwithstanding the fact that nearly all her time she’s afloat the air.

With her career catching up and the pay smiling on the other side, she thought wise to make savings back home. After consolidation, she chose on Barclays bank as the right prospect to use given its worldwide presence, and since she’s a trot, that would present a better option.

Two weeks ago, she flew back to Kenya, opened a savings account with Barclays made a deposit of over a million bob. Considering her investment was in better hands, she continued with her work, flew to the US almost immediately after opening the account.

Unfortunately, while in the US, she was mugged and lost her purse plus her phones too. Being precautious, she almost immediately called Barclays Bank back home as a security measure on her account. Travelled back to her residential Gulf country where she renewed her line she was initially using.

This was when the cat and mouse games with the staff in Nairobi started. Marion originally opened the account with her Kenyan phone number linked to it, and now that she wasn’t in a position to access that line which went along with her stolen items, she filed to have contact number changed to her present’s.

She intended to access the money in her account, and the only way of doing this was by activating internet banking. A pin is supposed to be sent to her number to activate the system. Before this could happen, the staff were to send her forms via email to fill for the internet banking system to be activated.

Concealed to her, a fleecing scheme was in its primary stages with the communication spark. Instead of promptly, sending the forms, they bought time and only sent them to her days later and this when she discovered the shock of her life.

Someone had fraudulently accessed her account and withdrew Sh.600,000 in an unexplainable transfer. Faced with the bitter reality and shocking discovery, she called the bank to inquire how this possibly happened while herself hadn’t made any transfer transaction. As usual, they told her to give them time as the fraud unit worked to establish how this could’ve happened.

From my investigations, there are minimal incidences that this could’ve happened, and all pointers take the directions at an insider plot at the bank. When Marion lost her items, she didn’t have her Barclays ATM card in it. In fact, she’s yet to collect the card from the bank. This rules out cybercrime instance by stealing bank details by blackhat criminals.

She was yet to activate internet banking service so there were nearly zero percent chances of effecting internet transactions by fraudsters or herself unless the bank had activated this service without her consent. Which in that case is criminal.

As she would later come to realise, the transaction was enabled via mobile banking, a service that again she hadn’t subscribed for. The only person who activates this, the bank. A basic explanation here, someone inside the bank enabled this services, accessed her account, transferred the cash without her knowledge.

The bank would’ve locked down her account the moment she called to inform them of her items lost and asking to switch contact numbers. They took a time to send her the internet banking activation emails in what now looks like a strategy to buy time for them to cook ways of accessing her account and making the illegal transfers.

The bank insists, they’re investigating the matter, but these developments expose what could be a bigger scandal going on within the bank. You can bet this isn’t an isolated case and that the staff could be actively involved in this fraud plot. If this amount is anything to go by then billions could be lost to rogue bankers schemes annually.

The bank must come out and weed out the criminal elements in the desks, crippling many people’s incomes, unless, its party to the larger syndicate. Marion is patiently waiting for answers, as she waits the fraudsters could be preying on another victim. Are you a victim of this same scheme or any fraudulent deals going on at any local bank? Email me ([email protected]) I will investigate the matter and expose the evil elements.