The push by politicians to open the Building Bridges Initiative (BBI) report for reviews is gaining momentum after it emerged that President Uhuru Kenyatta and opposition leader Raila Odinga have not been persuaded to accept further reviews.

Raila was bombarded with demands to review the document during the burial of former Committee of Experts chairman Nzamba Kitonga.

This comes days after he met party leaders where he suggested that the document could be improved without clawing back hard-fought gains.

The proposals of the report if adopted as it is will however rubbish all the gains brought by the 2010 constitution.

Raila had also met the Council of Governors (CoG) but failed to come to a consensus on some of the contentious articles, including governors’ opposition to having running mates of the opposite sex, and revenue flow to the counties.

All the governors are converging in Naivasha today to revise the document before they are by President Uhuru Kenyatta or Odinga on Monday or Tuesday.

President Kenyatta is currently on an official visit to the Vatican City, Italy.

Politicians are demanding change but they have veiled interests.  Someone like the Deputy President William Ruto is pretending to have slightly conceded when Raila’s camp does not want to back down but wants him to make good his threat to oppose the report. 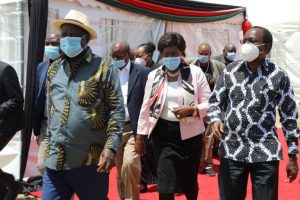 Raila, Ngilu and Kalonzo arriving at the burial of Nzamba Kitonga [p/courtesy]

DP allies fear that a contested referendum will drain their energy, resources, and derail their roadmap to capturing power in 2022.

Other leaders including former Vice President Kalonzo Musyoka are calling for a non contested BBI and drumming its support at the same time.

But Makueni Governor Kivutha Kibwana who seems to be headed to the DP’s camp called for involvement of all leaders for a consensus.

Ruto who spoke at the bride price ceremony  for Nakuru Senator Susan Kihika in Marmanet, Laikipia County also called for a consensus.

Raila has flatly rejected any call to review the document further, telling Ruto to talk his boss with whom they sit in the cabinet.

DP allies including former Agriculture Mwangi Kiunjuri have said they will only support the document only if it addresses issues affecting the common mwananchi.

But the document has been criticised for expanding the executive and the parliaments but having nothing substantial for the people apart from lining up and voting.

BBI task force member Major (Rtd) John Seii came out accusing the system of inserting the PM and his two deputies in the report, contrary what they had proposed.

CoG Chairman Wycliffe Oparanya said they were pushing for amendments on some sections touching on devolution and they will not relent.

“We had a meeting but we never concluded the issues. We have scheduled another meeting in Naivasha on Monday and Tuesday that will be attended by Uhuru and Raila.” Oparanya said.

The Wednesday meeting at State House had the governors mount pressure on Uhuru and Raila to agree to change the document.

The president is on record saying that the document is not cast on stone and can be improved.

Odinga says the same in presence of the president but he is against any change as the document opens a political battle front between him and DP William Ruto.

Governors want to have Article 218 of the Constitution amended to compel the Controller of Budget to release funds to counties in the absence of the County Allocation Act.

“The CoG proposes for gender parity in representation. However, it does not propose the running mate of every candidate for the position of governor being the opposite gender,” reads the governor’s draft proposal.