Just like the misinformed politicians on rugby and sports matters, Eric LUNGAI, a journalist at Standard Media exposed his mediocrity and ignorance to the nation when he wrote an article on The Standard newspaper (Wednesday, April 20, 2016 on page 3). 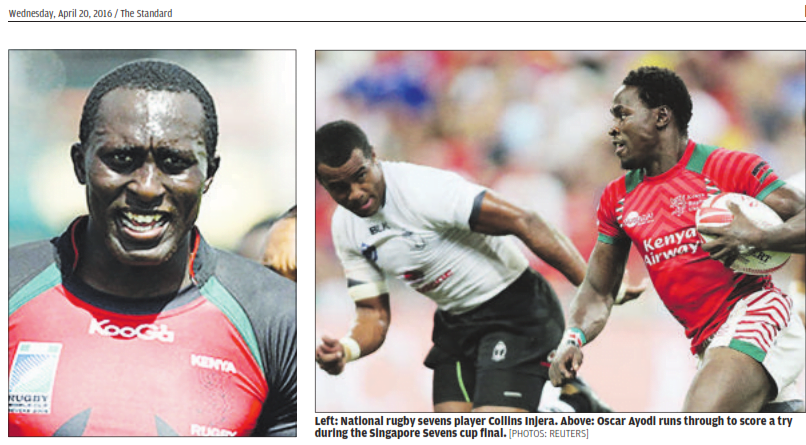 In his article, he confuses Humphrey Kayange with Collins Injera. He also gets it unsurprisingly wrong when he refers to Nelson Oyoo as Oscar Ayodi. Regardless of whether he’s knowledgeable in Rugby or not, he is a journalist who has to research before writing.
Clearly, he didn’t do any basic research because by now even a rural person in Maralal who has been following Kenyan news can distinguish between Tall and his brother Collo.
His research should have included watching the Singapore7s final (because I’m sure he didn’t), which is freely accessible on YouTube (https://youtu.be/DFYXOD3SI3o). By doing so, he would have seen Nelson Oyoo, and not Oscar Ayodi outrunning Kitione Taliga to make a try. (referring to his caption of the picture on his article).
Do these articles pass through the editors’ desks before printing?
Another ‘journalist’ with a notable mistake about the recent #Kenya7s victory:
Alex ISABOKE (Capital FM)-wrote in his article (http://goo.gl/8kXSyf) Injera has 224 tries instead of 225. Confirm here>http://www.worldrugby.org/sevens-series/ 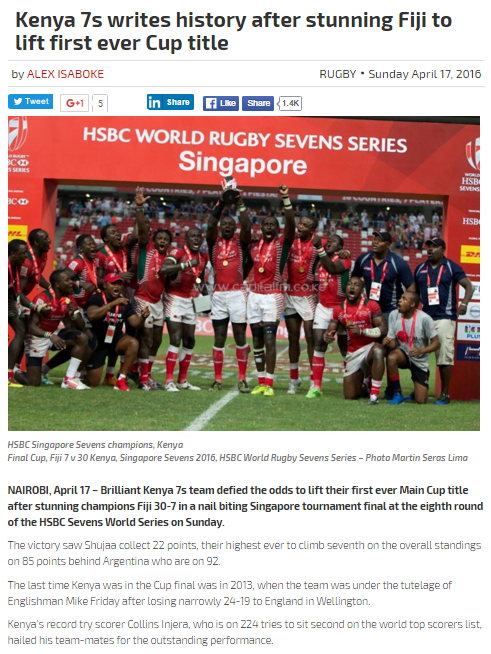 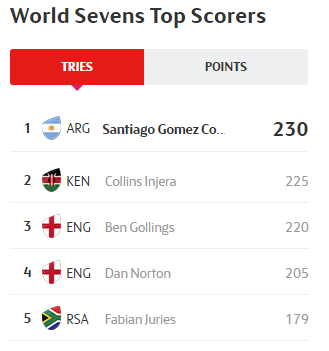 Alex had also written that New Zealand won the Plate over Samoa at Singapore7s, which was the other way round but has since updated the score.
Rodgers ESHITEMI (Standard Media)-In his article in the Standard Newspaper of March 7, 2016, he captions a picture with the wrong name of a Kenya7s rugby player. Instead of Billy Odhiambo, he names the player as Augustine Lugonzo. 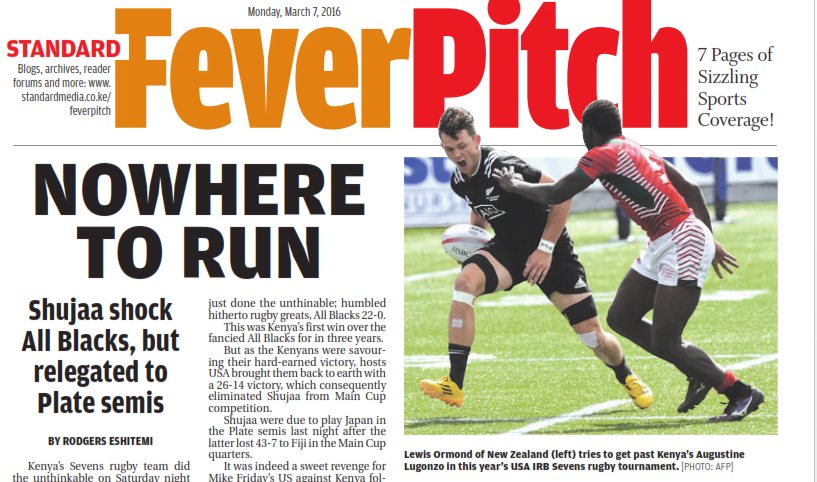 Response .
Thank you Melvin for raising these appalling errors from our mediocre media. It is sad to note that the Kenyan media has become so mediocre that most writers don’t check their facts before releasing a story to the public.
The standards are at a new low because most of these adolescent journalists are employed based on patronage and not merit . They have turned the media into their brothels forgetting that Kenyans deserve better.
Media executives like Linus Kaikai and Wachira Waruru are busy playing golf instead of striving to improve media standards. Indeed, The Kenyan media is becoming a big Joke and it is up to you, me and concerned Kenyans to do something.
Wake Up Kenyans .
Would you like to get published on this Popular Blog? You can now email Cyprian Nyakundi any breaking news, Exposes, story ideas, human interest articles or interesting videos on: [email protected] Videos and pictures can be sent to +254 710 280 973 on WhatsApp, Signal and Telegram.