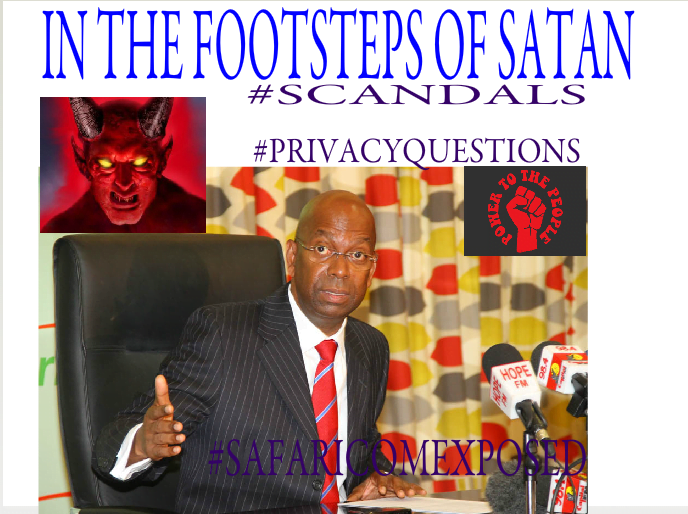 Privacy is now becoming a Major concern among Kenyans. I have always insisted that there is something awfully wrong with Safaricom. It seems they are completely drunk and staggering with monopoly.

Who said I need Safaricom in every aspect of my life as a Kenyan ? I will analyse and show you how Safaricom is trying to control Kenyans and going by history. . . This is a time bomb waiting to explode.

In part 4 of my investigative series, I challenged the Safaricom Security Tender. I questioned how Safaricom used the backdoor to win Huawei a serious security Tender. Let me Review the Part

When Parliament approved the Safaricom Surveillance security tender, I was shocked. Kenyans are a gullible people who can be easily bought. One Lawmaker referred to Safaricom as a ” Savior ” when he was giving them a go ahead to implement the surveillance tender…That day I went sleeping a disturbed Kenyan.

” No more listening to dissenting voices opposing the surveillance tender ” Was a reference to those Keen Kenyans who were questioning the involvement of Huawei in this serious and sensitive Security Tender.

To discredit Kenyans who are raising serious concerns about a serious security tender is heartbreaking, disturbing and shocking. The engineers of this Misfortune who want our secrets leaked to foreigners want those who are consistently questioning this deal silenced. What a load of frog droppings !

In August last year, Our Loyal Lawmakers approved the 15 Billion surveillance contract that was awarded to Safaricom controversially. This is after the committee raised serious concerns but went silent after something was put into their bottomless pockets. In Kenya, our Lawmakers dont make noise genuinely, when they oppose something it is either they have been denied a chance to eat or want something into their dirty pockets.

This August approval meant that Safaricom would partner with China’s Huawei technologies which would implement a SIGNIFICANT PART, Let me Shout again ” A SIGNIFICANT PART !

THE HISTORY OF CHINA’S HUAWEI IS DARK AND GRUESOME. I WOULD LIKE TO KNOW THE TYPE OF WEED OUR LAWMAKERS WERE SMOKING WHEN THEY APPROVED THE TENDER WELL AWARE THAT HUAWEI WAS USING SAFARICOM THROUGH THE BCKDOOR TO GET THIS CONTROVERSIAL TENDER. HUAWEI’S INTEREST IN KENYAN SECURITY ISSUES IS SUSPECT AND THEY ARE USING THIS FOREIGNER CALLED BOB COLLYMORE TO ACHIEVE THEIR MISSION .

Huawei was banned by the USA from winning contracts connecting phones from Sea to Shinning sea citing security concerns. After the espionage concerns, Huawei Boss shamelessly said the USA ban was not ” Very Important ”

The Cold Fact is that Huawei has ties with the Chinese Military and survey agencies hence always providing covert backdoors to broadband networks. Soon we will have a situation In Kenya where our crucial communication will be snooped and disabled by someone pressing a button from Beijing.

Huawei- A company we have trusted to entrust our serious security details with was Banned in Australia. They were banned from bidding on the country’s national broadband network because of grave security concerns about National Security. Efforts to Lift the Ban have been fruitless, even the opposition is supporting their ban . One Australian security Boss said lifting the ban is like ” Committing suicide ”

But My beloved country Kenya gave them a go ahead with the backdoor help of this Monopoly called Safaricom. Canada’s Surveillance and Cryptology agency warned its military of potential security risks in installing Huawei equipment’s. ” Huawei is a risk to our security, it should not be part of our security tech” Canadian officials furiously said.

With the Help of Safaricom and our Silly Rubber Stamps err Mps Huawei is now operating in Kenya with Impunity . Note that they operate in other countries but are being monitored Keenly. They are also being investigated by Myriad countries.

Taiwanese Intelligence held an emergency meeting to Ban Huawei products on security grounds. ” This is our policy now ” The NSB has banned using Huawei’s products and thinks other government bureaus should not use the companies products” Taiwan’s Tsai told an emergency parliamentary committee.

Beware that India established a lab to test for presence of spyware, walware and bagging software ” in Huawei telcom Kit…The results were shocking.

Yet our Mps allowed these monsters to operate in our country. In fact Huawei was disqualified three years ago and that is why they used Safaricom through the Backdoor . Note that in my analysis I have not politicized anything. I am just raising serious security concers. I have not even ranted about the 15 Billion Bloated Tender because I feel my security as a Kenyan is more important than Bucks

WE HAVE GIVEN SAFARICOM TOO MUCH AND IT IS A TIME BOMB. TO WHOM THE CLOCK TICKS .

The people who were supposed to Vet and tell Kenyans the truth are after money to seduce each other. Our Loyal media has no moral authority to question Safaricom because that would mean no money from adverts.

Telecoms operator Safaricom has applied for a digital broadcasting licence as it aims to take advantage of the convergence coming with digital TV migration to deepen its presence in the wireless Internet market.- Business Daily Africa Reported. I will call this Safaricom in our homes.

Things like Safaricom Foundation and other Charity works cannot compensate the damage these guys have done to Kenyans.

By the way this was a review of security so that Kenyans can see the need to be concerned.