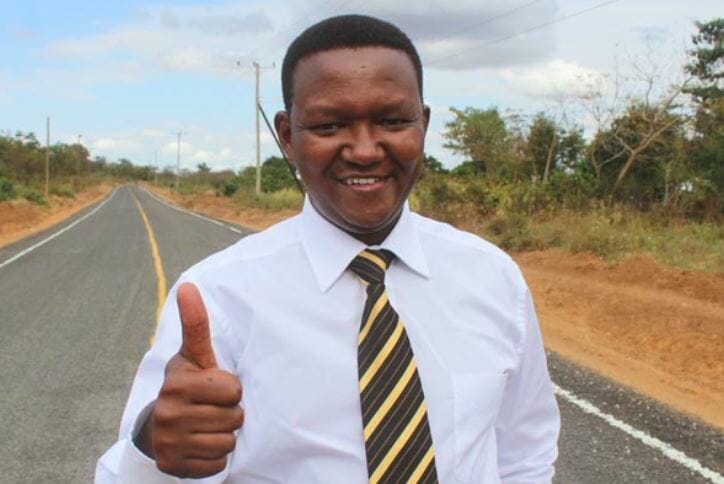 Impeached Machakos county government water officer Lemmy Muia Nzuma now claims Governor Alfred Mutua set him up and then used the assembly to boot him. Lemmy says Mutua paid majority leader Joshua Mwonga, minority leader Tom Kasoa and deputy speaker Nathaniel Nganga to marshal bribe-thirsty MCAs to kick him out after the governor allegedly used him to make millions of shillings at the water department.
Lemmy who learned of his impeachment while he was entertaining young women claimed that Mutua knew of the pipes and water tanks which the county purchased but were stolen.
Lemi now reportedly claims the theft was done on behalf of Mutua and chief of staff Mwengi Mutuse who was recently charged with corruption. Mwengi is constructing two hotels in Makueni and Machakos town. The hotel in Makueni is allegedly co-owned by Mutua and Mwengi. An Hotel in Machakos is allegedly owned by Mutua and one of his wives Lillian Ng’ang’a. The hotel  is reportedly short of Nganga which is Mutua’s surname and Lillian.
“I’m calling upon the Directorate of Criminal Investigation, Ethics and Anti Corruption Commission and government investigative agencies to launch investigations and carry out thorough audit of the Machakos county government,” Lemmy reportedly fumed.
“I have information which I can provide. Take for example the tractors, can anyone within Machakos show me any single tractor? What about the fertiliser and the chicken project? There was also that camera installation in towns, along the roads and markets. None is functional today. The floodlight project where done in books and where any are they are not working. There was also a purported supply of electricity posts,” he reportedly went on.
“The fertiliser and chickens and supply to farmers where done by the governor and Machakos Town MP Victor Munyaka, security cameras where a project of Mutua and Mwala MP Vincent Musyoka while electricity poles where supplied by Masinga MP Itwiku Mbai. Mutua and his allies should have been in Kamiti Maximum yesterday,” Lemmy is said to have ventilated.
Recently, Mutua launched Sh2.5 billion water project which Lemmy challenged investigative bodies in the country to move in to and point out where exactly the billions will be spent. The governor claims to be close to Uhuru Kenyatta and says he is untouchable because he is likely to be Uhuru’s running mate 2017 and president in 2022. To ensure MCAs are loyal, Lemmy is reported to have said, Mutua instructed water department to do earth dams in the homes of the MCAs allied to him and also instructed the county treasury to make payments to Rural Electricity Authority to install electricity to the homes of MCAs Mwonga, Kasoa and Nganga.