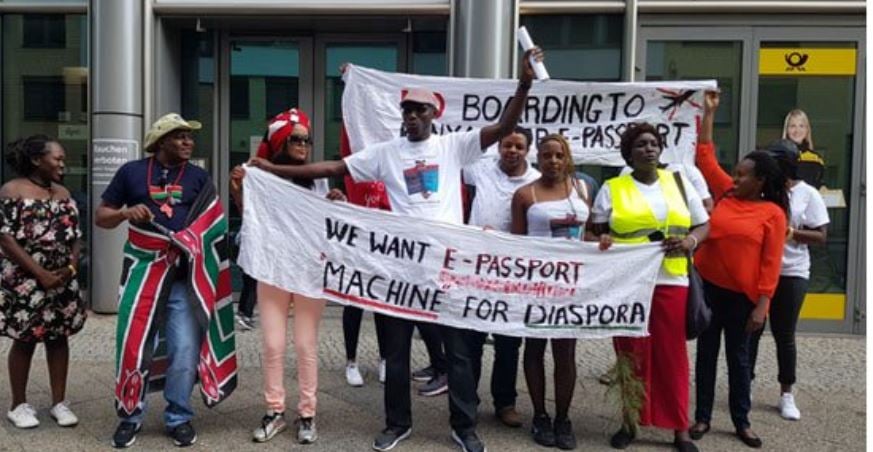 Kenyans in the diaspora remain the soft target for the ruthless corrupt Immigration officials to the extent of wreaking careers in the name of kickback.

The incessant reform announcements ostensibly to improve services are the tools the extortion syndicate at the Nyayo house needs to enhance their nefarious activities and ridiculous requirements such as filling copies of parents’ IDs whether dead or alive and credible recommender to obtain and renew the e-Passport are nothing but a windfall that could not have come at a better time.

The Immigration Department is known to have cultivated a working culture that is impervious to any reforms designed to curtail the extortion method that took root soon after independence. Furthermore, the tendency of sourcing directors from national security outfits to head the department is a sign of government mistrust. the source of resentment and disincentive.

According to one retired official, the tendency is resented by the Immigration community as it is a disincentive and an impediment to the long-serving officials aspiring to reach the pinnacle of their career.

Without the knowledge of the working matrix of the cartels, it is an exercise in futility for any director-general plucked from elsewhere to scuttle the venal proclivity that has inextricably become part of the system since independence.

Such CEOs often find themselves isolated at the helm performing only robotic duties such as signing of documents and doing Public Relations to dispel legitimate public outcry for malfeasance simply to appear hardworking to protect their position and by extension, shielding the cartel and impunity.

Former Director, Jane Waikenda who opted to go against the grain by suspending 13 senior Immigration officers just two months after her appointment in June 2013 found herself arraigned before the Ethics and Anti Corruption Commission, 14 months later on allegations of issuing Work Permit indiscriminately without the approval of the Permit Determination Committee.

Nevertheless, this is not to say every immigration official is drenched in corruption but the few honest ones are bound by the conventional rules of collegiality which legally does not exonerate them from culpability. The alacrity with which they cover and defend the wicked colleagues makes it almost impossible to separate the wheat from the chaff.

Unlike the Police or Kenya Revenue Authority that are known for pocketing government revenues to elude punishment or evade taxes, it is a different ball-game altogether at Nyayo house where both kickback and the mandatory government fees are paid for in full.

This, on the other hand, explains why the above-named institutions hardly feature in the annual audit report on the misappropriation of the statutory budget. Their benefactor is the public.

For those in the diaspora, nothing else sends a chill down their spine than seeking any form of services on immigration matters through an embassy where a humble inquiry is likely to lead to a brusque response or pejoratives and Berlin has excelled in that.

Being far away from home and with only the complicit Immigration attaches to report to Kenyans in the diaspora is the most vulnerable and the soft target for the extortionists who coincidentally have served in various Kenya’s missions abroad and know just too well the anguish of not having a valid passport in which the residence and work/education permits are hinged.

In addition, one cannot transact any business without this vital document and withholding in Nairobi is the most effective method to bring down the victims to their knees and voluntarily initiate the process of searching for a broker.

And to avoid the infinite delay that can take one or several years having a broker in Kenya is imperative and an indispensable obligation. Acting as a purveyor of villainy the broker dictates the fee that can be as high as 800% of the official charges.

A labyrinth-like method of channelling kickback proceeds to their accomplices at Nyayo house without a paper trail is a preserve of the brokers and well designed to ward off the Anti-Corruption detectives lurking around for a share.

And the decision by the Interior Minister, Fred Matiang’i to increase the fee two-fold, from the normal Ksh4,500 (€ 38) to Ksh7,506 (€ 64) for Kenyans in the EU may sound punitive but it is still far below of € 80 Kenyans in Germany has been paying ever since.

For the mutilated passport which was almost doubled to Ksh10,050 (€85) in the latest changes, the embassy in Berlin has been charging € 150 ever since. Whether the embassy has been retaining or remitting the difference to Nairobi is a matter for the Auditor General and no one else.

Faced with the prospects of existential disaster Kenyans abroad tacitly believe that kickback is no longer an option but a must. Those who have resisted either lost their careers or found themselves stateless. And a result the number of Kenyans applying for citizenship in Europe has exponentially increased.

It too early to predict what new rules will emerge after the deadline to acquire the new generation passport was pushed to 2020 from the initial date of August 2019 leaving intact Berlin, Paris and London as the only registration centres, a nightmarish requirement that will lock out a large number of less financially endowed individuals.

Kenyans living in Greece, for example, will have to make a road journey of 2,400km to Berlin, the nearest registration centre. With the exception of Hungary crossing the other 4 non-EU member countries will require a valid transit Visa if granted.

The gruesome ordeal of having the e-Passport processed in Nairobi notwithstanding, the mode of obtaining it once issued is not yet clear. Since the embassy cannot be held responsible for any loss of a posted document it is likely Kenyans in far-flung countries will have to make a return trip to collect the new passports.