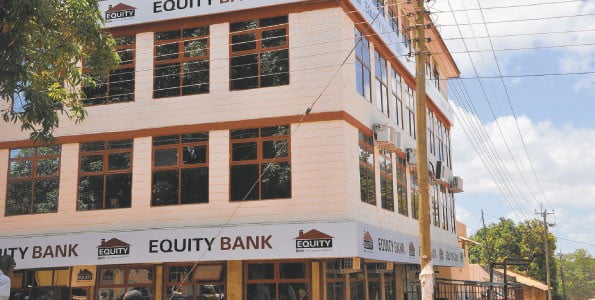 This is a warning to corporates, investment-groups, chama’s and other joint account-holders. Kindly give Equity Bank a wide-berth. Because the bank is not professional and rides predominantly on the fact that they revolutionised banking in Kenya by bringing the hitherto un-banked masses into the formal economy, they use this as a justification to flagrantly flout rules and procedures because they know they have the ear of Government and donors.

Secondly, anyone should be concerned when a CEO becomes too cosy with politicians or the status-quo. They will be bending over backwards to accommodate ridiculous demands. Any CEO having cosy relationships with Government officials is a Class “A” scumbag, and we know the usual suspects, the ones who bribe business journalists to always appear on TV telling us fuck-all.

For instance, we have recently brought Equity Bank to the fore, which has for long been acting the blue-eyed boy of Kenyan banking. We have discovered that directors specifically the chairman Peter Munga only moonlights in the account-books, scouting for prime property that has been attached as collateral, so as to hijack it using hostile means like sending auctioneers.

We have also read a sad story about how Bank of Baroda has been trying to acquire the property of the family of Tony Gachoka, by illegally inflating interests and trumped-up charges. Bank of Baroda is owned by fuckin Indians who should be deported out of this country because they cannot make it their core-business to loot from locals.

Just like James Mwangi and Peter Munga, directors of Bank of Baroda were simply eyeing the property of Tony Gachoka’s father so as to take it over, in the same manner that Peter Munga “stole” Pioneer School from an Equity Bank borrower. All bankers are thieves and tight regulations to curb their greed should be enforced because these directors are getting away with so much bullshit.

It is interesting to peep into the mind of the Honourable Mr. Justice Ogola, one of the Judges in the Commercial and Admiralty Division of the High Court:-

“I cannot conclude this judgment without making this generally disturbing observation, that, a customer is loaned Kshs.650,000/= in 1989. Within a few years he is in arrears and soon his property is auctioned at an inconclusive auction pursuant to which a deposit of 25% is paid, which is actually enough to clear the loan arrears and balances. In 2009, the same property is sold by private treaty at the same price of Kshs.4.5 million it was meant to be sold 13 years earlier. The entire Kshs.4.5 million is taken by the bank, which in 2009, still required more than Kshs.11 million from the chargor. That can easily be Kshs.15 million now. Really where is justice? Banks cannot just hide behind the contracts they make, regardless of how unjust they are, to literally destroy their customers. Without their customers the banks cannot operate. A time has come for banks in Kenya to look into the eyes of their customers and answer the question: Are banks Kenyans? Or have they just entered Kenya for business?

Banks in Kenya reign large. I am reminded of a predator who after killing the prey is not satisfied to leave the carcass to the vultures, but becomes both the predator and the vulture, killing the prey and gleaning the meat from the carcass to ensure the prey is really dead. I am also reminded of a robber killing his victim and not only attending his funeral, but insisting on carrying the casket to the grave to confirm that his victim is dead and buried. Else, how does one explain a situation or case at hand? Wasn’t there no time when the Defendant in this matter could say “this is the case and time to close this account?” It is a sorry state of affairs in our country. As all sectors of our society are being reformed, banks should not be left behind. They need to look into the eye balls of their customers and answer the question: “Are banks Kenyans?”

We recently focused on Equity Bank, after it emerged that they had illegally authorised a withdrawal from an account operated by Catham Properties, without the consent of the company’s main shareholder Guo Dong, currently in a Chinese jail. The withdrawal was instigated by Wenjie Li, a criminal Chinese Operative working in cahoots with Saitoti and Gatu, both being close aides of Interior CS Joseph Nkaissery. Gatu and Saitoti are yet to be interdicted, and Wenjie Li is yet to be deported from Kenya, despite being in the country illegally. That’s just how impunity has gained root since Uhuru Kenyatta became president.

In Oyugis Equity Bank Branch, there’s an account by the name “Kabondo Kasipul Women Group” Account No. 1500262397195 that money was embezzled without the knowledge of the group members.

There was a fundraiser to done for this group and close to Kshs. 4 Million was raised. The bank’s rules and regulations dictates that a group account must have atleast three signatories and for any withdrawal to be done, at least two must mandatorily sign. However, against their own rules, the account was opened with only one signatory the wife of the area MP. Silvance Osele. Against the policy of the bank, several withdrawals and funds transfers were done on this account as follows;

This totals to Kshs. 820,000.00 which was transferred from a group account to the MP’s account coz they were aware the group didn’t even know how much was collected for the harambee which had been graced by Francis Atwoli, Hon. Glady’s Wanga, Governor Evans Kidero among others. This account’s transactions had been even queried by the auditors in December 2014 and in March 2015 but they were bribed by the branch leadership (Eliud Maina-BGDM and Maurice Ndii-Operations Manager who’s currently BGDM Chuka branch).

Thereafter in March, after swindling some cash,they introduced the other two signatories and transferred Kshs. 2 Million to a fixed deposit account on 02/03/2015 and in less than 2 months that whole amount was also withdrawn due to their influence.

The former Mbale branch BGDM was forcefully living with a credit staff in the staff’s house. When the matter came up after more than one year, the BGDM resigned and the staff was transferred to Awendo branch where she’s currently working.

This happens across the branches of Equity Bank where junior female staff are forced into illicit relationships with their Managers and those who refuse are victimized and finally sacked.

This is what is done to all the staff who leave the bank. Loans are given to staff at an interest rate of 8% and immediately one leaves, this percentage is immediately hiked to 18%.

Ladies and gentlemen, for how long will you suffer in silence? Why should these fucking rogue banks deplete our livelihoods all due to their greed? Why should business journalists glorify bankers who are simply white-collar thieves?

President Uhuru Kenyatta should know that it will be political suicide if he declines to sign into the law the bill passed by parliament capping interest rates.