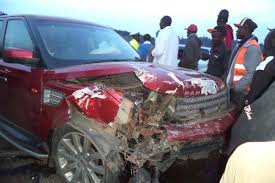 A defiant Pastor James Maina Ng’ang’a took to the pulpit on Friday night to curse his critics.

The pastor has been in the eye of a storm over a road accident in which a 43-year-old woman was killed.

The pastor thundered that his enemies would not succeed and they would soon come to grief as the congregation cheered him on.

“Those who are talking ill of me, I assure them that they will die before their time. Some of them are young children who are not married yet. They will never get married. Some have not yet given birth, and they won’t,” Pastor Ng’ang’a told his congregants.

The pastor spoke at the Neno Evangelism Centre along Nairobi’s Haile Selassie Avenue. Congregants had waited for hours until he arrived after 10 pm.

Addressing a 200-strong congregation, the Pastor paraphrased the biblical story of Jeremiah, saying what God said to him would happen to his enemies. “I will make them stumble and fall against each other,” he quoted, saying what he promised would apply to those who are currently “fighting” him and his “soldiers”.

“The devil has now attacked my forces. Instead of the forces praying for the church’s construction projects, they are now praying for me,” he said.

Dressed in a black overcoat, cream-coloured pair of trousers and brown shoes, he urged his supporters not to panic.

The controversy surrounding the preacher seems to have done little to dampen the enthusiasm of church members.

Witnesses allege that Pastor Ng’ang’a was at the wheel of a Range Rover which killed Mercy Njeri and injured her husband. The pastor has maintained he was not driving the vehicle.

Congregants sang vigorously and danced to popular gospel songs. Others jumped, pumped their fists in the air and clapped.

Without you I cannot handle it.”)

Mr Ng’ang’a arrived in the church at 10.17 pm. The Sunday Nation team was among the worshippers. Last week, security officials at the church barred journalists from accessing the venue.

In the lead-up to the energetic praise and worship session, an air of apprehension hang over the spacious church as believers trickled in. They talked in twos or threes while others sat deep in thought.

The tense atmosphere broke into energetic singing before Mr Ng’ang’a arrived. He was received with thunderous applause.

He started by saying that many people were being destroyed for lack of knowledge. Barely a minute into his talk, he delved into the controversy surrounding him.

“I know you have seen me in newspapers and heard of me on radio. And they will go on,” he said, adding that he would not talk to the media to clarify the circumstances under which the accident occurred.

Witnesses alleged the Range Rover was being driven on the wrong side of the road when it crashed into the vehicle in which Ms Njeri was driving. Her husband Martin Mbugua was seriously injured. The police have been accused of a crude cover-up of the accident.

“People are asking why I can’t speak to the media. But first I would wish to know if I am in the same spirit with (the journalist to interview me). If I am not in the same spirit, I will be doing nothing. Tunasema ni kama kupigia mbuzi guitar (It is like playing a guitar to a goat),” he said.

Though the pastor repeated several times that he was unfazed by the damning reports, he made numerous references to the episode.

He even asked why it was only the death of Ms Njeri that was generating debate.

The reference to Kisumu might have been with regard to a boat accident in Lake Victoria, in which two children died.

Pastor Ng’ang’a claimed people were “fighting” him because of his success. “They say a tree is hit only when it has fruits,” he said.

He read from the book of Jeremiah. “They will fight against you, but they will not overcome you, for I am with you to deliver you.”

He told the gathering that all would be forgotten soon.

He admitted having led a criminal life in the past — of stealing, smoking and taking alcohol — which he said was God’s plan to show him the error of his ways before he saved him.

“I thank God for the workers I have. Ignore those reports because they are just a creation of the media,” he said.

Meanwhile, the pastor’s fate now lies in the hands of the Director of Public Prosecution Keriako Tobiko.

Inspector-General of Police Joseph Boinnet said yesterday: “Director of Public Prosecution will decide how we will proceed. He has the option of returning the file and asking for further investigations.”