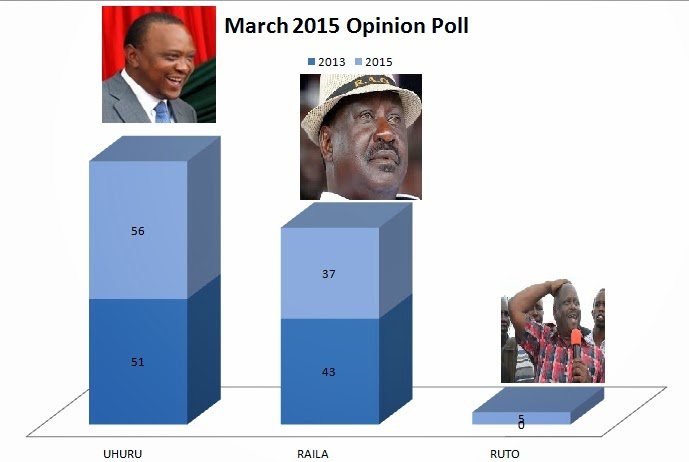 Thursday March 26, 2015 – According to an independent opinion poll conducted byThe Kenyan DAILY POST, if Presidential Elections are held today, President Uhuru Kenyatta will win by a landslide in the first round.
The poll which met all scientific data collection criteria used in research was conducted between March 21stto March 26th where over 7 100 respondents took part.
Out of the 7,100 respondents who were polled, 56 percent said they will vote for President Uhuru Kenyatta because he has demonstrated that he is a capable leader who is not interested in corruption.
37 percent of those interviewed said they will vote for CORD leader, Raila Odinga, while 5 percent said they will vote for Bomet Governor, Isaac Ruto.
This is good news to President Uhuru Kenyatta since he has improved his ratings from 51 percent during the 2013 General Elections to 56 percent two years later.
This also bad news to CORD leader, Raila Odinga, who has dropped his ratings from 43 percent in 2013 poll, to 37 percent two years later.
The poll respondents came from all the 47 Counties including some in the Diaspora.